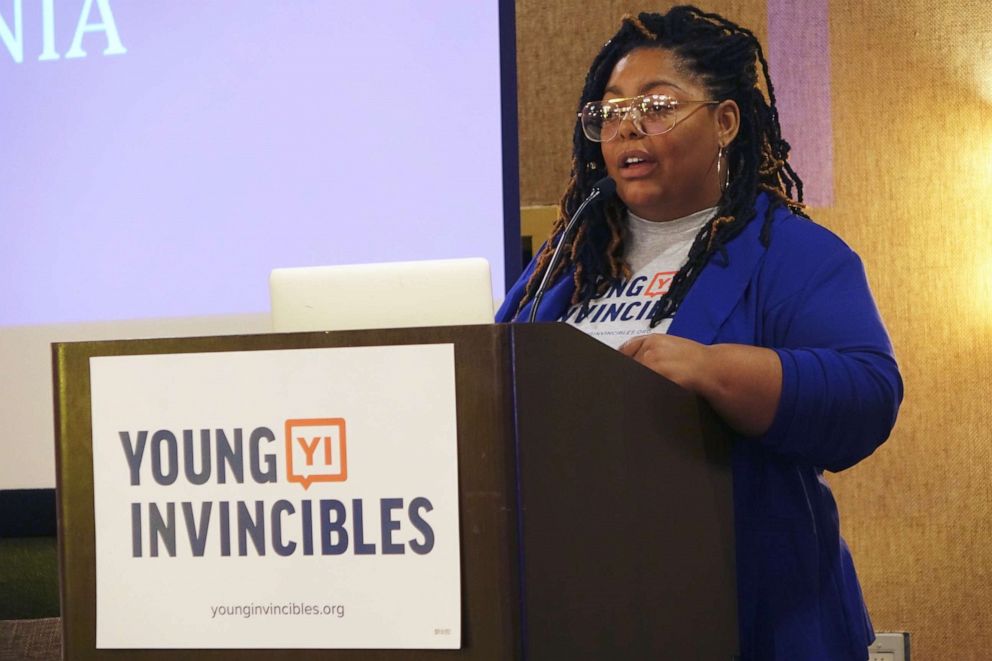 (NEW YORK) — Ameshia Cross, 35, spent the past two years of the coronavirus pandemic worried about how she would pay off her nearly $90,000 in student loan debt once the freeze on federal student loan payments ended.

Now, she said she will have $20,000 less to pay off starting in January, after President Joe Biden on Wednesday announced a long-awaited plan to cancel federal student debt for a subset of Americans.

Cross qualifies for $20,000 in loan forgiveness under Biden’s plan as a recipient of a Pell Grant — scholarships reserved for students with the highest financial need — and someone making less than $125,000 per year.

She said that while she is extremely grateful for having a portion of her debt canceled, she remains anxious about how she will pay off the rest of her loans when payments resume in January.

Cross — who worked two jobs and cared for her three siblings while in college — said the $20,000 that will be forgiven is less than the interest that has accrued on her loans over the past decade.

“Money only goes so far and it’s not like your salary increases or the money you have incoming increases at the rate of cost of living,” Cross, assistant director of communications for The Education Trust, a nonprofit focused on student equity, told “Good Morning America.” “Hopefully we will be in a different place come January, but right now the costs of groceries, the cost of basic necessities is just really, really high, and I think that makes it extremely difficult.”

As a Black woman, Cross is part of a population that stands to benefit the most from Biden’s student debt relief plan.

Black women carry a disproportionate burden of student debt. Overall, women hold nearly two-thirds of the nearly $2 trillion outstanding student debt in the U.S., and Black women are the most likely of any gender group to have student loans, with around 1 in 4 Black women holding student debt, according to data from the Census Bureau and the American Association of University Women.

Black women graduate college with an average of nearly $38,000 in student debt, according to the American Association of University Women, a number that grows at a faster rate over time than for other populations, data shows. Just over a decade after starting college, Black women, on average, owe 13% more than they borrowed, while white men, on average, have paid off 44% of their debt, according to The Education Trust.

“When I became a borrower, I didn’t think about the repayment, I thought about degree completion, and then the economic mobility that would come,” said Brittani Williams, a senior policy analyst in higher education at The Education Trust. “I figured I would graduate, get a job and pay those student loans back, and the reality for me was that I graduated, got a job and went back to school a couple of times.”

Williams, a mom of three, said payments on the tens of thousands of dollars of loan debt she still owes are on pause as she pursues a doctorate degree, which she expects to finish in 2024.

Though she too qualifies for $20,000 in loan forgiveness under Biden’s plan, Williams said she sees it as “just a start” and is already worried about restarting payments in the future.

When Biden announced the plan on Wednesday, he spoke of a generation of people “saddled with unsustainable debt” that impacts whether they can buy homes or start families, among other life choices.

That debt is especially harmful to Black women, who face both racial and gender discrimination on top of everything else. Even after entering the workforce, where they might ostensibly earn the money to pay off their student loans, Black women are paid less than their white male counterparts, earning just 63 cents for every dollar earned by white men on average, according to the Labor Department.

Gloria Blackwell, CEO of the American Association of University Woman, said Black women face the “perfect storm” of both a racial wealth gap and gender pay gap, which she said combine to keep them further behind their peers both before and during college, and then exponentially so afterward, when they graduate with debt.

“When you are a Black woman and you have this burden of student loans, it impacts every aspect of your life,” said Blackwell. “It impacts whether you can pay for basic living expenses, whether you can afford transportation or even the rent in order to have a decent place to live, let alone save for a house or be able to start a family or take care of your family. It’s a burden on Black women on whether they can save for retirement or afford rent or be able to move to a better neighborhood.”

Kristin McGuire, 40, said the past two decades of her life have been structured around her responsibility to pay back the more than $20,000 she borrowed to attend a four-year public college in California, an amount she said has increased to over $50,000 due to interest.

Now, as she pays for her oldest daughter to attend college, also in California, McGuire, the executive director of Young Invincibles, a youth advocacy organization, said she is preparing to resume payments on her loans in January, when the pause ends.

McGuire said she did not qualify for loan forgiveness under Biden’s plan, which she said she hoped would not include means testing.

“The president’s wording has been no one who makes a high income will be eligible for this relief, but $125,000 doesn’t really weigh in for regional differences or inflation,” said McGuire. “So because of that, a lot of coastal borrowers or folks who live on the coast or in major metropolitan areas will be excluded from this.”

Still, McGuire said she is “very, very grateful” that Biden took action because she knows so many people who are impacted by student debt for whom the loan forgiveness will help.

“I’m not exaggerating when I say every single person I know who went to college and is a Black person is overwhelmed with the burden of student debt,” she said. “And it’s all for the very same reasons, that we were all first-generation, we were all low-income and the cost of us attending college was more expensive because we had zero expected family contribution, which means we had to borrow the money.”

“That impacted everyone in my social circle in a different way, so these wins are more of a communal win for me,” she added. “I don’t have to view it as a personal win or loss.”

McGuire’s sentiment is one echoed by Corazon Eaton, of Columbus, Ohio, who paid off her remaining loan balance of more than $130,000 within the past year, but said she is still very happy with Biden’s loan forgiveness plan.

“I went into [paying off my student loans] knowing that it could potentially down the road end up getting forgiven or a portion of it getting forgiven [for others], and being at peace with that,” said Eaton. “I think the changes are going to propel and impact a lot of people.”

Still, Eaton, McGuire and the other women “GMA” spoke with all said they believe Biden’s action on student loan forgiveness should be only a first step and that more needs to be done to help Black women, including capping the rising cost of higher education and introducing greater debt cancellation options.

They also said they are proud that it was Black women who led the call — and who will continue to do so — for changes to student debt policy.

On the 2020 campaign trail, Biden pledged to approve $10,000 in student loan forgiveness for every federal borrower.