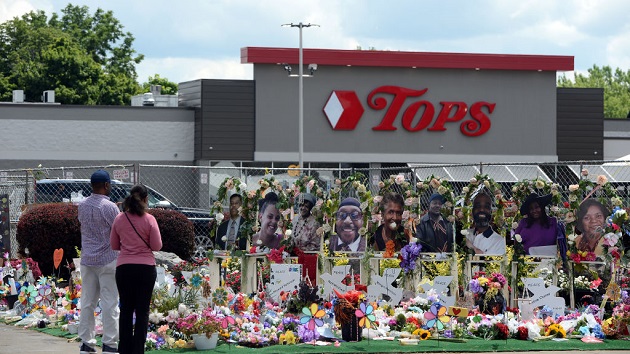 (BUFFALO, N.Y.) — When the Tops Friendly Market on Jefferson Avenue shut down after the Buffalo mass shooting, the community lost its only grocery store — a lifeline in a predominantly Black neighborhood that fought for years to obtain access to affordable and quality fresh food.

Two months after the shooting, the store is opening its doors again to the public on Friday, but the prospect of returning to the site of the massacre has been difficult for the community. With no other grocery store in the area, some have no choice.

Pastor Dwayne Jones was at his church, Mount Aaron Missionary Baptist Church, when the shooting occurred less than half a mile away. Jones, a developer who has spearheaded projects across the city to provide affordable housing to the community, said that the Tops should open only “temporarily” while they build a grocery store at a new location.

“[It] has been very traumatic to the congregation, to the community, to people — seeing those bodies come out of their Tops,” Jones said.

Ten Black people were shot and killed at the Tops by a white teenager in an alleged racially motivated shooting on May 14. The victims included four grocery store employees as well as six customers, several of them regulars at the store, according to the Buffalo Police Department and those who knew them.

Jones leads a congregation of 300 people at his church where one of the shooting victims, 63 year-old Geraldine Talley, was a member and was buried on church grounds.

“There’s a lot of fear,” Jones said. “There’s a lot of questions. Where do we go from here? How do we trust people that don’t look like us in the community? I wouldn’t say it’s healing, but it’s trying to get through the traumatic part before we get to the healing.”

Jamil Crews, a community leader and organizer who grew up in the East Buffalo neighborhood, said he understands why some don’t want to go back to the Tops and if there was another “viable option” in the community, he also wouldn’t want it to reopen.

“I saw the full video of [the shooting] – unedited, just raw, unedited, and it completely broke me,” Crews, who runs a marketing business located a few hundred feet away from the Tops, told ABC News on Wednesday.

But for many people, he said, “this is the only resource they have in that community, so they need it.”

Crews said he and some of his fraternity brothers will be at the reopening Friday to help elderly people with their groceries and send a message that “it’s safe to come back.”

Community members, store workers and Tops executives gathered on Thursday afternoon for a prayer service and a moment of silence to mark the two-month anniversary of the shooting and honor the victims ahead of the store reopening.

The company said in a statement the store “will quietly and respectfully reopen to the public.”

Regular shoppers, a retired police officer: Remembering the victims of the Buffalo shooting
Asked about relocating, Tops Friendly Markets President John Persons said at a press conference in June that it would take two to three years to do so, according to Buffalo ABC affiliate WKBW.

According to Persons, who spoke at the rededication of the store on Thursday, about 75% of the employees who worked at the Jefferson Avenue store at the time of the shooting have returned to work, which he said is “a testament to their resiliency.”

Persons said in June that employees who don’t feel comfortable returning have the option of working at other branches. According to the franchise’s website, Tops Friendly Markets operates 150 stores across Pennsylvania, Vermont and New York, with seven locations in Buffalo.

Persons also said the store will undergo extensive renovations and remodeling and when it reopens, it will have a different look and feel.

“It will become an ever greater resource to combat local food insecurity and support health and wellness,” he added.

Following the shooting, the closure of the Tops supermarket underscored the long-standing divestment in East Buffalo that led to the predominantly-Black area to become a “food desert.”

Food deserts are when households lack access to a market because they live beyond walking distance and don’t have a personal vehicle, translating to overall food insecurity, Andre Perry, senior fellow at the Brookings Institution and author of the book “Know Your Price: Valuing Black Lives and Property in America’s Black Cities,” told ABC News, adding that Black households are more than two times likely to be food insecure than the national average.

Perry attributes practices such as redlining as a key factor that contributed to the lack of food access. Redlining refers to the practice of withholding services — such as providing housing subsidies — from low-income or minority communities.

“We know that in order to get a supermarket there, there are models created largely around density, around buying power and a number of other factors that really punish poor communities, low income communities and rural communities for not having wealth,” Perry said.

Community leaders and city officials, including Buffalo Mayor Byron Brown who was a council member at the time of the store’s opening, advocated and lobbied for a supermarket. When Tops Friendly Market opened in 2003, it became a source of pride for the community.

Crews said he still remembers what it was like before the Tops opened its doors when the area was a food desert, with the nearest grocery store more than 3 miles away.

Tops’ opening, he said, “was a big deal because it’s like, finally we have something where we can have access to the fresh fruits and vegetables and we don’t have to rely on like the secondhand stuff or the powdered milk.”

Following the shooting, the store was inaccessible as a crime scene in an active investigation.

While the store was closed, community leaders like Crews worked to make sure people still had access to fresh food. Advocates planned food drives across the city, buses provided free transportation to neighboring grocery stores and volunteers worked to distribute donated hot meals and groceries to East Buffalo families.

“The whole community kind of rallied together,” Crews said.

In the aftermath of the shooting, Tops Friendly Markets partnered with the National Compassion Fund to establish the Buffalo 5/14 Survivors Fund to provide direct financial assistance to family members of the deceased and those impacted by the tragedy. As of Thursday morning, the fund received more than $4.26 million in donations, including a $500,000 donation from Tops Markets.

Jones said his mission is to meet with city officials to advocate for a “full-sized” grocery store to be built at a new location because even before the shooting, the Tops “wasn’t good enough.”

According to Jones, the grocery store is smaller than others across the city and having only one option speaks to years of divestment, redlining and systemic racism in the predominantly Black community in East Buffalo.

Pointing to the plan to demolish Robb Elementary School — the site of the mass shooting that left 19 dead in Uvalde, Texas — Jones said he believes the city should demolish the Tops building and the site should become a memorial to those who were killed.

“They’re going to build a new school because they don’t want to send the kids or the community back into somewhere that was traumatized,” Jones said, reflecting on his own trip to Uvalde, where he met with families of the victims.

“I think we need to have that same compassion in Buffalo, New York,” he said.

Tyre Nichols: What the video footage reveals, and questions that remain

Newport News school shooting: How a 6-year-old got a gun and other questions that remain