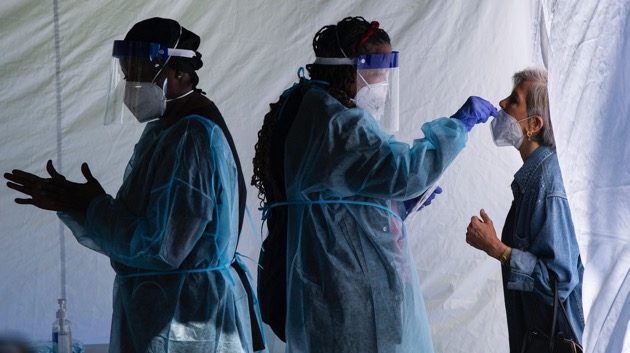 (NEW YORK) — As the COVID-19 pandemic has swept the globe, more than 5.4 million people have died from the disease worldwide, including over 833,000 Americans, according to real-time data compiled by Johns Hopkins University’s Center for Systems Science and Engineering.

About 62.4% of the population in the United States is fully vaccinated against COVID-19, according to data from the Centers for Disease Control and Prevention.

Jan 07, 8:45 am
CDC director stands by new guidance, despite criticism

Dr. Rochelle Walensky, director of the U.S. Centers for Disease Control and Prevention, is standing by her agency’s new quarantine and isolation guidance for COVID-19, which the nation’s largest association of physicians has criticized as “confusing.”

The CDC updated its guidelines on Dec. 27, saying asymptomatic people who test positive for COVID-19 should self-isolate for five days rather than 10. In a scathing statement released Wednesday night, the American Medical Association (AMA) said the new recommendations “are risking further spread of the virus.”

“The American people should be able to count on the Centers for Disease Control and Prevention (CDC) for timely, accurate, clear guidance to protect themselves, their loved ones, and their communities. Instead, the new recommendations on quarantine and isolation are not only confusing, but are risking further spread of the virus,” the AMA’s president, Dr. Gerald E. Harmon, said in the statement. “With hundreds of thousands of new cases daily and more than a million positive reported cases on January 3, tens of thousands — potentially hundreds of thousands of people — could return to work and school infectious if they follow the CDC’s new guidance on ending isolation after five days without a negative test.”

“I’ve read the AMA statement and I have deep respect for the AMA,” Walenskey said, “but I will also say we’ve heard a lot of support for ongoing guidance from public health partners, from other clinical and laboratory partners as well.”

Walensky referenced “dozens of studies” that have shown a COVID-19 patient is most infectious in the one to two days before symptoms and the two to three days after symptoms.

“So by five days after your symptoms, the vast majority of your contagiousness is really behind you,” she said. “And what we say at day five then is, are your symptoms gone? Are you feeling better? Is your cough gone, sore throat gone? And if so, then it is safe to go out if you are wearing a mask all the time. And that means not going out to restaurants, not going out to gyms, not going out and visiting grandma, but really conscientiously wearing your mask for those last five days.”

Walensky noted that people may choose to take an antigen or at-home test at day five, if they have access to one. But it’s not required.

“If that test is positive, you should stay home for those extra five days. But if that test is negative you should go out and continue to wear your mask,” she said. “You know, these tests are actually not authorized for the purpose of evaluating contagiousness.”

Guthrie admitted during a press conference Thursday that the stockpile of unused tests, manufactured by Abbott Laboratories, sat idle in a Florida warehouse amid a lack of demand for them.

“We had between 800,000 and 1 million test kits — Abbott rapid test kits — in our warehouse that did expire,” Guthrie told reporters. “We tried to give them out prior to that, but there was not a demand for it.”

The tests expired between Dec. 26 and Dec. 30, after being granted a three-month extension, according to Guthrie. Meanwhile, the country has been grappling with a winter surge of COVID-19 infections, fueled in part by the highly contagious omicron variant and holiday gatherings, that has sparked an increased demand for tests, leading to shortages and long lines across the nation.

Florida Agriculture Commissioner Nikki Fried, a Democratic candidate for governor, has accused Florida Gov. Ron DeSantis and the Florida Department of Health of stockpiling tests amid hourslong lines at testing sites in some parts of the Sunshine State.

The number of global cases of COVID-19 crossed 300 million on Thursday night, according to data compiled by Johns Hopkins University.

With many people now experiencing second bouts of the virus, it’s unclear how many total people have been infected globally.

Chicago Public Schools, the nation’s third largest school district, canceled instruction on Friday for the third day in a row amid an impasse over in-person learning.

Classes were first canceled Wednesday, and then again on Thursday, after a majority of the Chicago Teachers Union’s membership voted this week in favor of remote learning during a surge in COVID-19 cases.

The district said Thursday evening that all classes will be canceled on Friday, though some schools may be able to offer in-person activities for students.

“Our schools are the best, safest place for students to be during this pandemic, and we are working tirelessly to get everyone back in class every day,” Pedro Martinez, head of the school district, said in a letter to families, noting that they are continuing to work with the union “to resolve this situation.”

The study found that the J&J vaccine was 74% effective against breakthrough infection in the weeks following the shot. This level of protection held steady over the next three months and started waning after the fourth month.

The Pfizer and Moderna vaccines, meanwhile, were 88% and 92% effective, respectively, against breakthrough infection in the weeks following the second dose, the study found. This level of protection started waning after the second month, falling progressively over six months.

Protection against severe illness remained more stable over time for all three vaccines.

The analysis, which has not been peer-reviewed, looked at data from 168 million people between Jan. 1 and Sept. 7 of last year. It covers a period of alpha and delta variant dominance, but the results could change now that the omicron variant is also present.

The data supports current guidance from the Centers for Disease Control and Prevention for booster shots after two months for the J&J vaccine to bring initial efficacy higher, and booster shots for Pfizer and Moderna vaccines after five and six months, respectively, to boost efficacy after a period of waning.

COVID-19 vaccines dramatically reduce the risk of severe illness and death from the virus, according to a new study from the Centers for Disease Control and Prevention published Thursday.

The study looked at 1.2 million fully vaccinated adults who received either two shots of the Pfizer-BioNTech or Moderna vaccines or one shot of the Johnson & Johnson vaccine.

The small portion of people who did become seriously sick or die of COVID-19 after being vaccinated were primarily older adults, immunocompromised people or those living with multiple underlying medical conditions.

The study was conducted before the emergence of the omicron variant, which appears to more easily evade — at least partially — the protection offered by vaccines.

Months after father of four murdered in Florida, wife still searching for answers