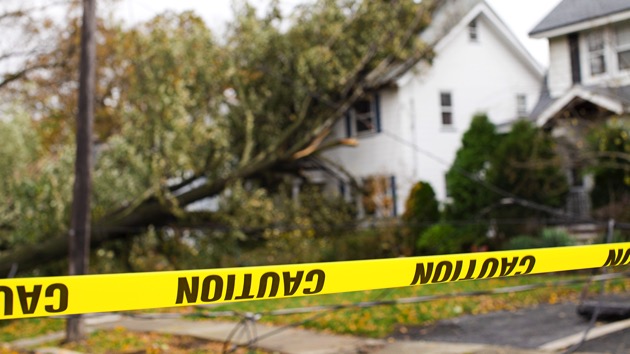 (NEW YORK) — At least 34 people across five U.S. states have been confirmed dead after a swarm of tornadoes tore through communities across the South and the Midwest over the weekend.

There were at least 40 tornadoes reported across nine states between Friday night and early Saturday morning — unusual for December in the United States. Kentucky was the worst-hit state, with at least 20 confirmed fatalities, according to local officials.

Kentucky Gov. Andy Beshear warned Sunday that the death toll from what he described as “the most devastating tornado event in our state’s history” could exceed 100, but then later said the tally might be closer to 50. Two of his relatives were among those killed.

Beshear said at least 300 members of the Kentucky National Guard have been deployed across the state to help remove debris and search for survivors as well as victims.

“We are still hoping for miracles,” the governor told ABC News’ David Muir on Sunday. “We are finding people and every single moment is incredible.”

“This is going to take years to rebuild,” he added.

Among the dead were eight night-shift workers at a candle factory in Mayfield, a city of about 10,000 people in western Kentucky. There were 110 employees inside the Mayfield Consumer Products facility when a tornado closed in late Friday night. Ninety-four workers have been accounted for, while eight remain missing, Mayfield Consumer Products CEO Troy Propes told ABC News.

One of the survivors, Kyanna Parsons, recalled hunkering down at the candle factory with her coworkers when the tornado hit. She said she felt a gust of wind and her ears popped. The lights flickered before going out completely and the roof of the building suddenly collapsed, she said.

“I definitely had the fear that I wasn’t gonna make it,” she added. “It’s a miracle any of us got out of there.”

Mayfield Mayor Kathy Stewart O’Nan said she was at the scene of the destroyed factory the following morning. She saw first responders from Louisiville, Kentucky’s largest city, more than 200 miles away, “who had already gotten there, who had got in their trucks as quick as they could and come to help us.”

“The offers from all over the United States are overwhelming,” O’Nan told ABC News’ Robin Roberts on Monday. “We are so blessed with the state and federal support.”

The mayor said her city lost its sewage treatment plant and a water tower, in addition to many homes and businesses. Mayfield still has no power, natural gas or flowing water, according to O’Nan.

“The immediate needs of our city people and our responders are being met with just wonderful donations,” she said. “But our infrastructure is damaged so severely that getting that up and running is our absolute greatest priority at this time.”

O’Nan, who lives about four blocks from the center of the city’s downtown area, said she knew from watching the news last week that this storm would be “different.”

“This was not a storm that us Kentuckians like to go out on the porch and watch roll by,” she said.

When the tornado touched down on Friday night, O’Nan said she took shelter in the basement of her home and waited there until she heard it pass overhead.

“That is a horrifying sound that I hope I never hear again,” she said.

A few minutes later, O’Nan said, she got a call from the city’s fire chief saying the couldn’t get the firetrucks or ambulances out of the bay at the fire station, because the doors wouldn’t open. He ultimately had to attach a chain to his truck to pry the doors wide so firefighters and emergency workers could be deployed out into the field, according to O’Nan.

“To watch them work tirelessly as they have during the last two days so far has just been heartwarming and heartbreaking at the same time,” the mayor said.

“When I’m ever asked what’s the greatest asset of our community, it is always our people,” she added. “We’ve had small tragedies before and every time immediately the people bond together. I’ve seen that so much now, but we’re joined by so many people from all across the commonwealth, all across the United States.”

Meanwhile, six people were killed in Illinois, where a tornado hit an Amazon facility. Four others were killed in Tennessee. There were two deaths reported in Arkansas and another two in Missouri, according to local officials.

A tornadic supercell left an extraordinarily long path of destruction — about 200 miles long — as it swept across four states on Friday night. It was unclear whether the storm involved one or multiple violent tornadoes that moved along the path.

On average, there are 69 tornado-related fatalities in the U.S. each year, according to data from the National Oceanic and Atmospheric Administration. The deadliest tornado on record to hit Kentucky occurred on March 27, 1890. There were 76 deaths.

U.S. President Joe Biden declared a state of emergency in Kentucky on Saturday, ordering federal assistance to support the local response efforts. On Sunday night, Biden updated the declaration, making federal funding available to affected individuals in the Kentucky counties of Caldwell, Fulton, Graves, Hopkins, Marshall, Muhlenberg, Taylor and Warren. He also made it possible for residents to get assistance, such as grants for temporary housing or business repairs.

Buffalo supermarket at center of deadly shooting a community lifeline