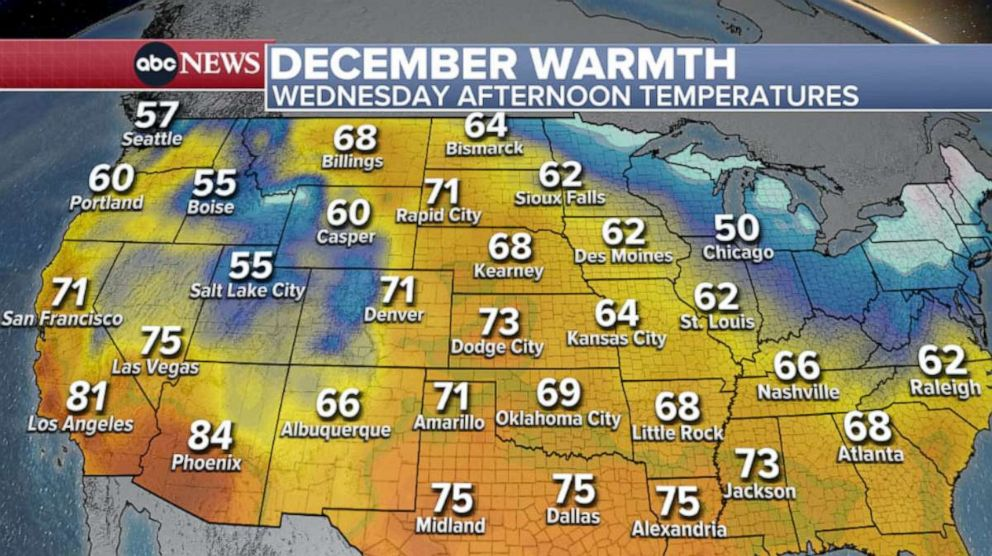 (DENVER, Colo.) — Denver is making weather history this year as the city patiently waits to receive its first measurable snow of the 2021 winter season. This is the latest the city has ever waited for snow, according to the National Weather Service.

For a snowfall to be considered measurable by the weather service, it must be greater than a tenth of an inch.

Denver will begin the month of December without any snowfall for the first time in history — and there’s still no snow in sight for the near future. The previous record for the latest first snowfall in the city was set on Nov. 21, 1934.

The Mile High City has now gone 223 consecutive days without snow as of Tuesday, and is just 12 days away from passing the all-time record of 235 snowless days, a record that was set in 1887, 134 years ago.

“With no snow expected for the next several days, a move up to second place is certainly possible by next weekend,” the weather service said of the consecutive snowless streak on Monday. Currently, this year ranks as the fourth longest without snow, just behind a 224-day record set in 1889.

Sitting on the downslope of the Rocky Mountains at 5,500 feet above sea level, dry weather isn’t exactly abnormal for Denver. This is partially because during the winter months, weather systems, which generally form west to east, precipitate higher up in the mountains. As the system moves down the mountains toward the city, much of the leftover moisture evaporates.

Additionally this year’s Pacific jet stream, a high altitude wind current that can affect weather, is following a La Nina pattern, which could also be contributing to the region’s lack of snow and precipitation.

But the West has also seen the effects of climate change over the years as weather has gotten drier and winters have shortened.

The underwhelming snow figures come amid an ongoing drought in the western United States, where about 49% of the region is under extreme or exceptional drought conditions, according to the National Drought Mitigation Center at the University of Nebraska-Lincoln.

In Colorado, 40% of the state is in a severe drought, and Denver has received between zero and 25% of its normal precipitation in the last 30 days, according to the National Integrated Drought Information System.

These conditions have led to increased fire danger in Boulder, where county authorities ordered stage one fire restrictions to be put into effect on Tuesday over the lack of moisture and above-average seasonal temperatures.

The Boulder County Sheriff’s Office added in a press release that “moderate to severe drought conditions” and low resource availability could impact the ability to obtain “vital suppression resources” if a fire were to erupt.

The abnormally warm and dry weather has also begun to impact the famous Colorado ski season, which typically starts in the late fall.

One hundred fifty miles northwest of Denver, the Steamboat Springs Ski Resort has also seen less than average snowfalls. Crews were forced to generate more than 20 acres of snow across five trails using artificial snow blowers after the mountain initially delayed its season’s opening by one week, citing an “unseasonably warm” fall and little snow.

“Normally this time of year we’ve had more than 20 inches of snowfall, a 10-20-inch mid-mountain base and 200 hours of snowmaking under our belt,” Dan Hunter, vice president of resort operations, said in a statement. “This year we haven’t been able to capitalize on extended snowmaking temperatures and windows.”

Loryn Duke, director of communications for Steamboat Springs Ski Resort, noted that snowmakers this season have now logged just over 100 hours of snow production, with the resort now open to skiers. Duke said that the mountain would have been well on its way to 300 hours of production in past seasons by this point, with mild temperatures this year hampering snow generation efforts.

“Even though temperatures will continue to be on the warm side (for Steamboat and Colorado),” Duke said, “our crews will continue to work around the clock taking advantage of conditions prime for snowmaking and opening new terrain and lifts as soon as possible.”

Man, 21, with special needs shot three times, including in head, while waiting at bus stop in Chicago

Winter storm bringing snow, ice and tornadoes, expected to wallop US this week