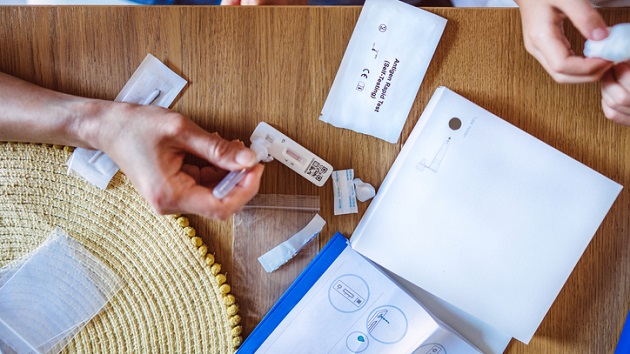 (WASHINGTON) — Americans who don’t have health insurance will now start to see some of the free COVID-19 testing options disappear, even if they are showing symptoms.

Quest Diagnostics, one of the largest testing companies in the country, told ABC News that patients who are not on Medicare, Medicaid or a private health plan will now be charged $125 dollars ($119 + a $6 physician fee) when using one of its PCR tests either by ordering a kit online or visiting one of the 1,500 Quest or major retail locations that offer the tests, such as Walmart or Giant Eagle.

More than 30 million Americans had no insurance during the first half of 2021, according to CDC estimates.

This week, federal funding to cover the cost of COVID-19 testing and treatment for uninsured Americans officially dried up; any further infusion of cash hinges on Congress passing the White House’s request for billions more in COVID relief, which is still stuck at an impasse.

Quest has begun notifying its clients and partners they can no longer expect to be reimbursed for uninsured claims, barring additional funding from Congress.

For some of the major retail pharmacies, things are still in flux.

Walgreens told ABC News no firm decisions have yet been made. The company said it is waiting on further guidance from the White House and federal agencies and is remaining “hopeful for a path forward that ensures uninterrupted access to COVID-19 services.” CVS told ABC News it is “fully confident” a solution will be found between Congress and the administration.

But unless Congress agrees to more COVID-19 funding, it is likely companies will have to either absorb the cost of uninsured customers — or begin charging them.

Meanwhile, groups such as the National Association of Chain Drug Stores, which represents major retail drug stores and supermarkets such as CVS, Costco Wholesale, Hy-Vee and Albertsons, have been sounding alarm bells on the issue and pushing the Biden administration and Congress to sort things out.

“Any premature lapse in funding that splinters care access threatens to disintegrate the robust, equity-driven COVID-19 pandemic response that has so far saved more than a million lives,” NACDS wrote in recent letters to the White House as well as Senate and House leadership.

With funding for the uninsured expired, the support structure to provide equitable access to COVID-19 testing and treatment is “in imminent jeopardy,” the group wrote, warning the funding cut “could create extreme confusion at the pharmacy counter” and “result in the tragedy of increasing disparities in access to critically needed care and patients forgoing care.”

Fostering equitable access to COVID-19 care for vulnerable groups is contingent on making sure sick people get the treatment they need in time, because antiviral therapies such as monoclonals or Paxlovid must be taken within a short infection timeframe. So, getting treated is contingent upon getting tested in that limited window, to receive what is already a shrinking supply of free treatments. Getting tested in time is also contingent on being able to afford the service, which is not a given, especially for lower income families.

“The loss of access, as a result of expiring COVID-19 care programs, could undermine the nation’s broader, comprehensive response efforts, and NACDS agrees that inaction at this pivotal time could set the nation back, leave the nation less prepared, and may cost the nation more lives,” the letter read.

The American Clinical Laboratory Association — the national trade association representing some of the leading clinical labs responsible for COVID-19 diagnostics (including Quest and LabCorp) — is similarly raising concerns.

“Without question, the exhaustion of these funds will threaten access to testing for the most vulnerable Americans at a critical time in our nation’s response effort,” Tom Sparkman, ACLA’s senior vice president of government affairs and policy, wrote to House and Senate leadership this week.

Sparkman told ABC News in an interview Wednesday the funding cuts for the uninsured is two steps backward in the pandemic progress.

“We are still in a public health emergency. We’re not out of the woods yet — we don’t want to start taking apart pieces of the response. We need to remain strong and vigilant, and the uninsured funding is a critical component of that,” Sparkman said. “It’s extremely concerning.”

“We can’t start rolling up the carpet,” he said. “Not learning the lessons from past surges — of keeping a higher level of surge capacity for testing, keeping those lines warm and available — I think that would be a mistake.”