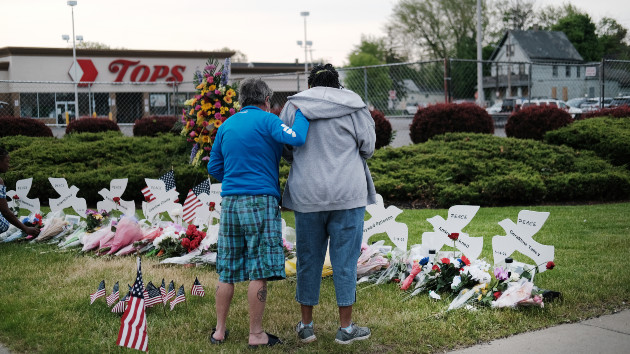 (BUFFALO, N.Y.) — The funerals for several victims of the mass shooting in Buffalo, New York, are starting to take place.

Ten people, all of whom were Black, were killed in a mass shooting at a Tops supermarket in an attack authorities are calling a “racially motivated hate crime.”

The victims included four grocery store employees as well as six customers, several of them regulars at the store, according to the Buffalo Police Department and those who knew them.

Deacon Heyward Patterson’s funeral will begin at 12 p.m. on Friday at Lincoln Memorial United Methodist Church. Civil rights leader Rev. Al Sharpton and other community leaders are expected to make an appearance at the service.

Patterson’s family described him as a loving person.

“An honorable man. A family man. A working man. A community man. An honest man that was at a grocery store in a parking lot,” a relative of Patterson in an interview with ABC-affiliate WKBW-TV.

He leaves behind a wife and daughter.

The family of Roberta Drury will hold her funeral on Saturday at the Church of the Assumption in Syracuse.

Her sister Amanda Drury described her as a “vibrant and outgoing” woman who could “talk to anyone” in an interview with ABC News.

An online obituary says Drury “couldn’t walk a few steps without meeting a new friend. She made sure every single person in the room was having a great time, ready to laugh and hug at a moment’s notice.”

The funeral for Katherine “Kat” Massey will be held on Monday, May 23, at the Pilgrim Missionary Baptist Church.

“She’s in a true sense of the word, a warrior,” Betty Jean Grant, a friend and fellow community activist, told WKBW. “She loved working and she loved helping people.”

Sharon Belton-Cottman, a Buffalo school board member and a community activist who worked with Massey in the community group We are Women Warriors, told ABC News that she is dedicated to renaming Massey’s street after her late friend.

Celestine Chaney, a mother and grandmother of six, will be laid to rest on Tuesday, May 24, at Elim Christian Fellowship.

Chaney’s son, Wayne Jones, told the Buffalo News, “If people’s moms are still around, just don’t be too caught up in social media and the world to pick up the phone and talk to your mom or your dad.”

Services for Aaron W. Salter Jr. will begin on Tuesday at the Amigone Funeral Home.

Salter, a retired Buffalo Police officer, was killed after he confronted the gunman, who entered the store wearing military fatigues, body armor and a tactical helmet.

He has been hailed as a hero for his actions against the alleged Buffalo shooter.

Salter retired from the police department several years ago and had been a “beloved” member of Tops as a security guard, according to Buffalo Police Commissioner Joseph Gramaglia.

“He took on a responsibility to protect the customers and the employees in the store,” Gramaglia said. “And he did exactly what he signed up for.”

Pearl L. Young’s funeral will be held on Wednesday at the Elim Christian Fellowship.

In a phone interview with ABC News, her sister, Mary Craig, said Young “was such a beautiful, sweet woman.”

Young raised three children — two sons and a daughter — and was a long-term substitute teacher with the Buffalo Public School District and Emerson School of Hospitality.

“She loved her children, her family, and her Good-Samaritan COGIC church family. She was a true pillar in the community,” the family said in a statement to ABC News.

Services will be held for Margus D. Morgan on Friday, May 27, at True Bethel Baptist Church, at 11 a.m.

In a text message, Cassandra Demps, his stepdaughter, told ABC News that he was “a great father, wonderful partner” who was “funny” and “always willing to help his family.”

Morrison is “a soul that will always be missed,” she added.