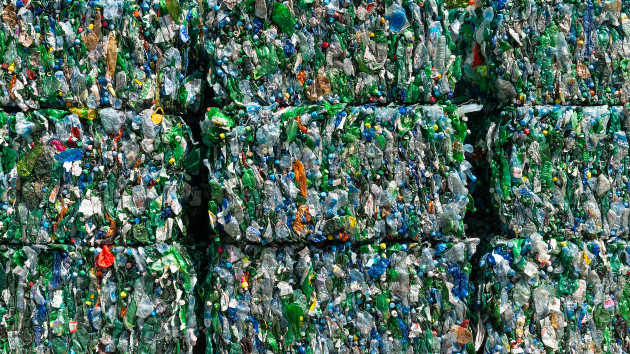 (NEW YORK) — A new report by the environmental nonprofit Greenpeace released on Monday finds that the vast majority of plastic waste produced by U.S. households is not recycled.

Lisa Ramsden, a senior plastics campaigner at Greenpeace USA and one of the authors of the report, spoke with host Brad Mielke on ABC News’ “Start Here” podcast about the biggest takeaways from the report, the state of the recycling industry in the U.S. at large and what consumers should know about recycling.

START HERE: Can you describe this new report you guys have because it freaked me out. Like, am I not…should I not be…I can’t recycle anything? What’s going on?

LISA RAMSDEN: So, most plastic is not being recycled in the United States. American households produced about 51 million tons of plastic last year, and only 2.4 million of those tons were actually recycled.

START HERE: As in people are sending them to a recycling center and they’re just not getting recycled?

RAMSDEN: Exactly. So there are many difficulties that come along with plastics recycling and people are sending these off to be recycled and then they are sitting in recycling facilities across the country not being recycled or they’re being incinerated or sent to landfills instead.

START HERE: This is enraging. Why is that? Because I take a lot of pride in [recycling]. Like I wash out my thing, so it’s not dirty, I send them off. So what’s, what’s the problem?

RAMSDEN: So the problem isn’t with recycling. The problem is with plastics. Plastics are a really difficult material to recycle. It’s difficult to collect because we have so much plastic in this country and in this world. It’s really difficult to sort because there are so many different types of plastic. And even in one plastic bottle you can have a couple of different types of plastic.

It’s actually really environmentally harmful to reprocess the plastic. Microplastics are created sometimes, and it can be toxic for the workers who work in these recycling facilities.

And all of these come down to the main point, that is that plastic recycling is just not economical. It’s often cheaper for companies to buy new plastic than it is to buy recycled plastic. So there’s not a huge market for it.

START HERE: Yeah, I was going to say, what is the corporate responsibility here? Because it seems like you have corporations proudly, and until a few minutes ago I would have said responsibly, are putting on their packaging that this is a recyclable product. This is a No. 1 or No. 2. Do those mean anything, by the way, the No. 1 and No. 2?

But corporations actually worked with industry groups to kind of create what plastics recycling is now. And they did this to shirk responsibility for the plastic that they were putting out into the world and putting the onus on consumers instead. You know, if they create a bunch of plastic bottles and put them out into the world, they don’t have to worry about it because it’s up to the consumer to then take that bottle and put it in a recycling bin.

And so they can kind of wipe their hands clean of all the plastic that they’re producing. And so by putting that ‘please recycle’ symbol on their bottle or whatever type of plastic material, they’re hoping that it will get recycled. But as this report points out, these plastics aren’t being recycled.

START HERE: So what do we do? Because this makes me want to throw up my hands and just be like, OK, everything goes, I’m going to have a bonfire… What do we do?

RAMSDEN: It’s important to keep recycling because again, the problem is not with recycling, it’s with plastics and other types [of recycling].

RAMSDEN: Exactly. Other types of recycling do work. The issue is with plastics. So it’s really important to talk to these corporations who are producing so much plastic and get them to change their ways.

We at Greenpeace are calling on corporations to switch to systems of refill and reuse. So we used to be able to get a Coca-Cola in a glass bottle that we would then return to the stores. It would be cleaned out, sanitized, refilled, and then sold again.

RAMSDEN: Yes, exactly. It’s not a new concept. It’s how the milkman used to get milk to people. And we used to return those bottles and they would be cleaned and refilled. So we’re calling on big corporations to switch to these systems, at least to have a portion of their portfolio focused on refill and reuse.

START HERE: That’s fascinating. And is there an onus on a consumer then to just consume less plastic? Like when I go to the bodega down the street, should I be using glass instead of plastic?

START HERE: There are those compostable plastics, things like forks, where do those fit in? And cups, things like that. It makes me wonder, are those really compostable? And is it a good solution? Is that something we want to be getting companies to do to adopt more?

Also, the reason why we are calling for a switch to refill and reuse is because we don’t want to switch from one type of single use or disposable product to another single-use disposable product because that’s going to put a strain on another part of the world or our resources and things like that.

So yeah, everyone wants to have an easy switch where we just, you know, why can’t we just switch from plastic to paper or why can’t we switch from plastics to compostable? But that’s going to put a strain somewhere else on our environment. So that’s why we’re really calling for this real systemic change, switching to systems of refill and reuse and package-free solutions.

START HERE: Thank you so much for the time.

RAMSDEN: Yeah, thanks so much.