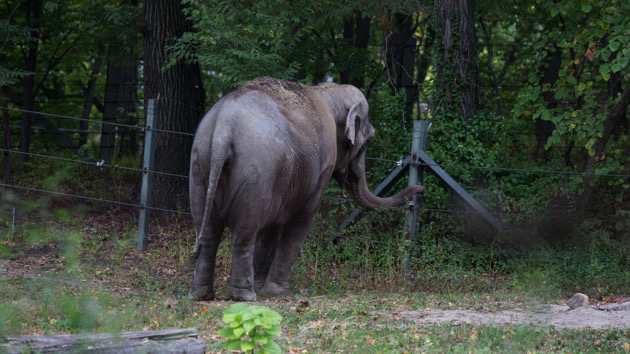 (NEW YORK) — A yearslong legal attempt to get Happy, an elephant residing at the Bronx Zoo, transferred to an elephant sanctuary failed Tuesday when New York’s highest court rejected a petition from the Nonhuman Rights Project.

The group filed a writ of habeas corpus on Happy’s behalf, suggesting a legal instrument that has safeguarded the liberty of humans, by providing a means to secure release from illegal custody, should also apply to an elephant.

The New York Court of Appeals disagreed, though it said Happy was entitled to proper care.

“Because the writ of habeas corpus is intended to protect the liberty right of human beings to be free of unlawful confinement, it has no applicability to Happy, a nonhuman animal who is not a ‘person’ subjected to illegal detention,” the decision said. “Thus, while no one disputes that elephants are intelligent beings deserving of proper care and compassion, the courts below properly granted the motion to dismiss the petition for a writ of habeas corpus, and we therefore affirm.”

Happy has lived at the zoo for 50 years.

The elephant was part of a 2006 study published in the journal Science that described her ability to recognize herself in a mirror as evidence of human-like self-awareness. As such, Nonhuman Rights Project asserted, the elephant was not a thing lacking rights but akin to a person with a fundamental right to liberty based on the principle of habeas corpus, which guards against unlawful detention.

The Nonhuman Rights Project first filed a writ of habeas corpus arguing for Happy’s legal personhood and seeking her release from the zoo in 2018. A New York City judge denied the habeas corpus relief in 2020. The state Court of Appeals granted an appeal last year.

In a statement Tuesday, the Nonhuman Rights Project said that the court’s decision to reject its petition “is not just a loss for Happy, whose freedom was at stake in this case and who remains imprisoned in a Bronx Zoo exhibit. It’s also a loss for everyone who cares about upholding and strengthening our most cherished values and principles of justice — autonomy, liberty, equality, and fairness — and ensuring our legal system is free of arbitrary reasoning and that no one is denied basic rights simply because of who they are.”

The group said it plans to continue its campaign for her release and “consider our legal options and next steps in New York.”

ABC News has reached out to the Wildlife Conservation Society, which runs the Bronx Zoo, for comment.

Trump Organization CFO due in criminal court on tax evasion

Highland Park shooting suspect to appear in court for arraignment