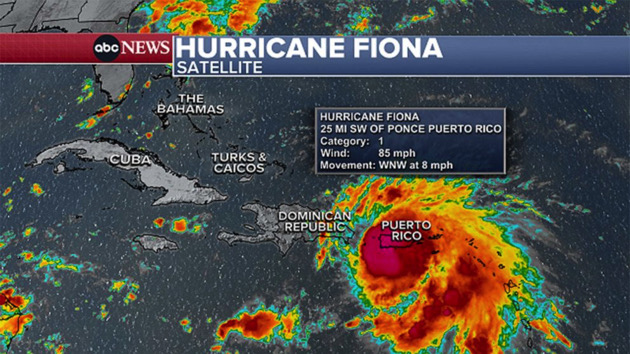 (NEW YORK) — The entire island of Puerto Rico has been left without power as Hurricane Fiona strengthens and moves northward on Monday.

Fiona made another landfall overnight in the Dominican Republic near Boca de Yuma on the eastern side of the island with sustained winds of 90 mph and even higher gusts.

On Monday morning, the hurricane was moving over the Dominican Republic with damaging winds and rain, causing more flash flooding in the region.

Hurricane warnings remain in place for the Dominican Republic as well as Turks and Caicos on Monday.

The storm has left destruction in its wake in Puerto Rico. More than 1.5 million customers are without electricity after the Category 1 storm, with sustained winds at 85 mph and torrential rain, bore down on the island, Puerto Rico Gov. Pedro Pierluisi said Sunday afternoon.

Emergency response teams for the utility companies will deploy once the conditions allow, Pierluisi said. It will likely take days to restore the power, utility company LUMA Energy said in a statement Sunday.

Fiona strengthened to a hurricane from a tropical storm Sunday morning. The National Hurricane Center said Fiona made landfall in southwestern Puerto Rico on Sunday at 3:20 p.m. ET, dumping torrential rain on much of the island.

Some regions measured up to 25 inches of rain by 8 a.m. Monday, and flash flood warnings remain in effect for much of the island, according to the National Hurricane Center.

A flash flood emergency was issued overnight due to many rivers rising very quickly out of their banks. The Rio Grande de Arecido river rose 13 feet in one hour.

A bridge near Utuado, a town in the central mountainous region of the island, has collapsed, cutting off the communities of Salto Arriba and Guaonico, local newspaper El Vocero de Puerto Rico reported.

The portion of the bridge that collapsed is on Highway 123, a branch of Highway 10, which serves as a link between both roads and is one of the accesses to the University of Puerto Rico at Utuado campus, according to El Vocero.

The bridge, installed by the National Guard following Hurricane Maria, cost about $3 million to construct, the newspaper reported.

The rain saturated areas in the southeastern part of Puerto Rico, along with the mountainous areas, are where potential mudslides and winds could cause the most damage.

Prior to landfall, Pierluisi said Puerto Rico was prepared as it could be, with enough resources and manpower in place to respond — adding that the island learned its lessons from the devastating effects of Hurricane Maria in September 2017.

“We’re much in a much better position than we were five years ago,” he said.

After passing through the Caribbean, the storm system will head northward, passing just east of Turks and Caicos before tracking near Bermuda, forecasts show. The storm system will continue to gradually strengthen in the coming days as it moves north and then northeast this week.

Forecasts place Fiona near Turks and Caicos Monday night into Tuesday morning as a strong Category 2 hurricane with winds near 100 mph.

Tremendous rainfall is forecast, with much of the Dominican Republic expected to receive up to 10 inches and some regions in Turks and Caicos expected to see 8 inches of rain.

On Tuesday morning, Puerto Rico and the Dominican Republic will continue to see gradually improving conditions, however, lingering showers and thunderstorms will still be likely, potentially impacting initial cleanup and recovery efforts.

By mid-week, Fiona is forecast to become the first major hurricane of 2022 Atlantic season, with winds of up to 125 mph.

Winds could be as high as 125 mph as the storm passes near Bermuda, bringing strong winds, heavy rain and storm surge. Some models show the storm hitting Bermuda directly on Friday.

While it won’t make landfall in the U.S., the hurricane will affect the entire East Coast with huge waves, rip currents and coastal flooding from Florida to Maine as it moves northward.

Biden’s decision has the “purpose of alleviating the hardship and suffering caused by the emergency on the local population, and to provide appropriate assistance for required emergency measures, authorized under Title V of the Stafford Act, to save lives and to protect property and public health and safety, and to lessen or avert the threat of a catastrophe in all 78 municipalities in the Commonwealth of Puerto Rico,” the White House said in a statement.

Resident Magda Diaz told ABC News outside a San Juan Walmart that she expects to be without power. Diaz said she loses power regularly, especially during smaller storms, and was recently in the dark for three days.

A LUMA Energy official told ABC News on Saturday that the company has been fixing the grid and is ready to get the grid back online if the system fails. LUMA Energy is in charge of the transmission and distribution of electricity on the island.

“We were expecting power outages from Fiona … and we’re bringing in 100 more workers from our parent companies that will be landing Sunday,” LUMA official Don Cortez said.

“We are going to make sure [a widespread outage] will not happen because we have the crews,” he said. “There will be damage. There will be outages and we will be ready to respond.”

Timeline: When did officials tell people to evacuate from Hurricane Ian?