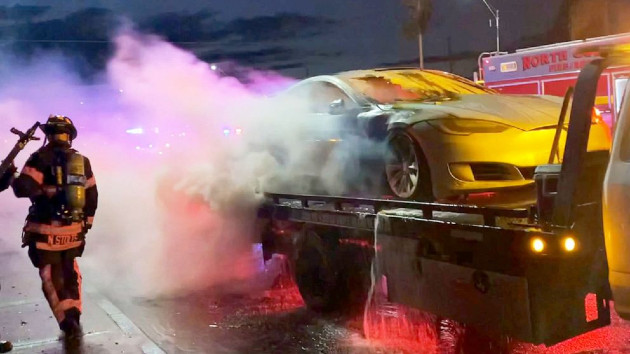 (NEW YORK) — As Florida officials and residents continue to clean up and assess the damage caused by Hurricane Ian, they’re discovering the storm has turned some electric vehicles into incendiary devices on roads, parking lots and even on the backs of tow trucks.

Electric vehicles that were flooded and damaged by the storm have been catching fire without warning in incidents throughout the hardest hit areas in the state, according to State Fire Marshal Jimmy Patronis, who told ABC News his team has counted at least nine such incidents. In some cases, the EVs would burst into flames, stay on fire, then reignite hours later.

The National Highway Traffic Safety Administration (NHTSA) has warned that EVs can ignite weeks after contact with saltwater.

As storms increase in ferocity, and the sale of EVs increases worldwide, it’s a phenomenon we are likely to see much more of says Eric Fredrickson of Call2Recycle, a non-profit which specializes in transporting lithium-ion batteries to recycling facilities.

“Part of what we’re dealing with right now is that this is the first major storm that we’ve had in an area where we have a high penetration of electric vehicles. So we’re seeing these fires in these incidents more than we have with any of the other storms,” he said.

It’s also a challenge for firefighters who have to use between 8,000 to 12,000 gallons of water to put out the fires, more than 10 times as much as a gas engine-based vehicle, according to James Hammond, the assistant chief of operations at North Collier Fire Control & Rescue District.

“It’s just a constant flow trying to cool them down and stop the battery,” Hammond told ABC News.

Hammond said his teams would typically spend an hour putting out a traditional gas-powered vehicle, but have spent five or six hours dousing electric vehicles.

Saltwater flooding is the main factor behind these fires, according to the National Highway Traffic Safety Administration. The flooding creates a chain reaction in the engine and the batteries that made the parts more likely to catch on fire, the agency said.

The biggest concerns, according to firefighters and safety experts, is that it is still unknown what could spark the blaze in the first place. Something as simple as turning the wheel following the saltwater damage could start the fire in the vehicle, experts said.

The issue has gotten so bad that some tow truck drivers in Florida have refused to pick up flood-damaged EVs. Tim Baker, a tow truck driver, told ABC News that one car he picked up caught on fire after he brought it to his lot.

“They have the potential to catch fire pretty much any time,” he told ABC News.

NHTSA responded to a request by Florida state fire marshal Jimmy Patronis, who asked for guidance on the problem stating, “Lithium-ion vehicle battery fires have been observed both rapidly igniting and igniting several weeks after battery damage occurred. Timing of the fire initiation is specific to the battery design, chemistry and damage to the battery pack.”

The agency recommends that flooded EVs be parked at least 50 feet from any structures, vehicles or combustibles.

“Always assume the battery and associated components are energized and fully charged,” the NHTSA said in its letter to the state.

Patronis also called on automakers to work with the state to come up with solutions and procedures when dealing with the flooded EVs.

“As [EVs] grow in popularity, this is a potential threat that we’re going to have to deal with,” he told ABC News. “I want to create solutions that work, other than just providing water to try to control the temperature of a battery that is burning out of control.”

One solution is education, according to Fredrickson.

Fredrickson said the simplest way of avoiding an EV car fire is moving the car away from a potential flood area before a major storm, and if a car is submerged in salt water unplugging it from the wall before power is restored could be key to preventing it from bursting into flames.

That’s a concern going forward, according to Bobby Schneider of the Energy Security Agency, a company contracted to help mitigate EV car fires.

He said there could still be hundreds of EVs stored in people’s garages in Florida that could turn into potential fire hazards once power is returned to the grid.

Schneider said that with the increased use of EVs, thousands of fire departments and first responders across the country need to be trained in “the uniqueness and particulars of the hybrid and electric vehicles.”

Two charged by DOJ for targeting anti-abortion clinics in Florida