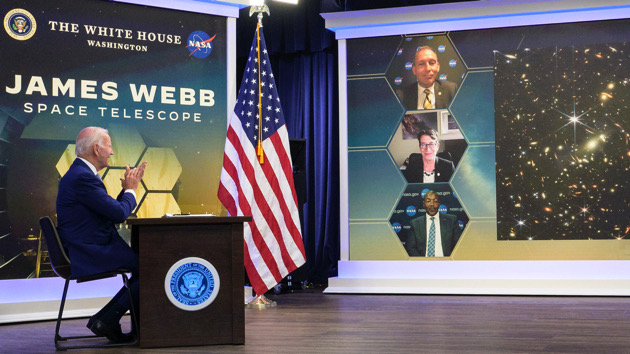 The images, the full set of which will be released Tuesday morning, will be the deepest and highest resolution ever taken of the universe, according to NASA.

The telescope will help scientists study the formation of the universe’s earliest galaxies, how they compare to today’s galaxies, how our solar system developed and if there is life on other planets.

It is the highest-resolution image of the universe ever captured, officials said.

“Today is a historic day,” said Biden. “It’s a new window into the history of our universe and today we’re going to get a first glimpse of the light to shine through that window.”

NASA Administrator Bill Nelson said the light seen on the image has been traveling for over 13 billion years.

NASA announced Monday all four of the James Webb Space Telescope’s scientific instruments are ready to start being used.

The space agency said there are 17 modes, or ways, to operate the instruments. All have been examined and are “ready to begin full scientific operations.”

The last step was was checking the the telescope’s NIRCam, which block starlight so scientists can detect other nearby structures, such as exoplanets.

A test image taken by the James Webb Telescope offers a preview of what’s to come ahead of the release of the first full-color images.

NASA shared the photo last week taken by one of the telescope’s instruments, the Fine Guidance Sensor, or FGS, to demonstrate how strong, clear and sharp Webb’s images will be.

According to the space agency, the “false-color mosaic” is made up of 72 exposures taken over a 32-hour period.

NASA noted that the primary focus of the FGS is not even to capture images but to make sure the telescope is pointing precisely at its target.

Development began in 1996 but ran into several delays before it was completed in 2016 at a final cost of $10 billion.

The telescope was launched on Christmas Day and is orbiting 1 million miles from Earth.

It used infrared radiation to detect objects that are invisible to the human eye.

The four goals of the telescope are to study how the first stars and galaxies formed right after the Big Bang, comparing the galaxies from the past to those of today, how planetary systems formed and if there is any sign of life on other planets.