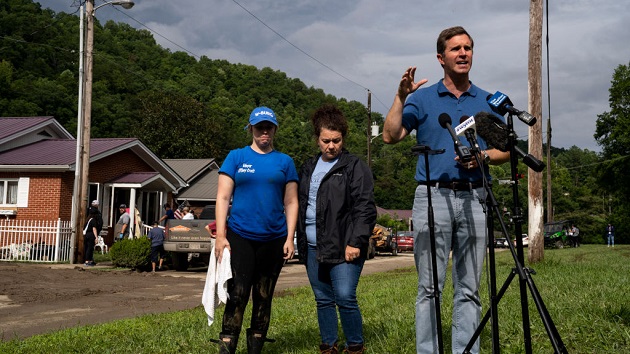 National, state and local authorities are working to bring food, water and electricity to those in the affected areas, he said.

“These are proud, hardworking folks that have just lost it all, and I think the least we can do as human beings, as people of values, is to give and do what we can to get them back on their feet,” Beshear said.

At Wednesday’s press conference, Beshear also said 1,300 people have been rescued from flooded areas and 3 have been confirmed as missing, although that number is likely higher than what has been reported.

The death toll hasn’t risen since Monday, with 37 people reported to have died due to the floods, according to the governor.

Beshear said that a total of 219 people have been temporarily housed in Kentucky’s state parks and another 221 in shelters, to account for 440 displaced individuals. However, there are many more displaced persons that are staying with friends and family that are not included in that total, he said.

Cooling centers have been established across eight counties region braces for severe heat on Wednesday and Thursday, according to Beshear. The governor encouraged residents, especially elderly, high risk and displaced individuals without electricity to use the cooling centers in order to stay safe in the heat.

Beshear added that power outages were cut almost in half on Tuesday, with a remaining 5,058 hookups without power. Water outages remain at just over 1,800 service connections and 45,600 are under boiled water advisories, he said.

The most essential relief right now, Beshear said, is to get people water.

The National Guard has distributed over 2,400 cases of water as of Wednesday morning. Crews continue to deliver supplies and conduct welfare checks, officials said.

Jeremey Lowe, a Kentucky National Guard detachment sergeant and critical care flight paramedic, said the role of his crew has changed from emergency rescues to health and welfare checks over the last couple of days.

At the height of the flooding, Lowe’s crews worked to hoist people off roofs and out of trees using aircraft to take them to a safe area. The paramedics are now working to help elderly and medication dependent residents, he said.

Lowe told ABC News the majority of their welfare checks require no further assistance from the team, as “the people affected are self-sufficient and independent.”

While many people have been evacuated throughout the flooding, some are now sheltering in isolated areas, relying on food and water deliveries from authorities, Kentucky National Guard crew chief Shaun Morris told ABC News.

Morris said flooding conditions seem to be improving, but that debris and damages have left many roads and bridges impassable, making his airborne crews essential to the relief effort.

Beshear said many roads and bridges have been “just eaten away.”

There is a Team Kentucky Flood Relief Fund that has raised over $3 million in donations for affected families, Beshear said.

The first funds will go toward funerals for those who were killed in the floods, Beshear said.

“A lot of the grief that we’ve suppressed these last seven days trying to get the mud out and take care of each other…it’s going to come to the surface,” Beshear said. “Remember it’s okay not to be okay. I don’t think our brains or our hearts are designed to deal with trauma and loss at this level.”

‘Dire situation’: Kayaker who helped in Kentucky flood rescues on difficult recovery ahead