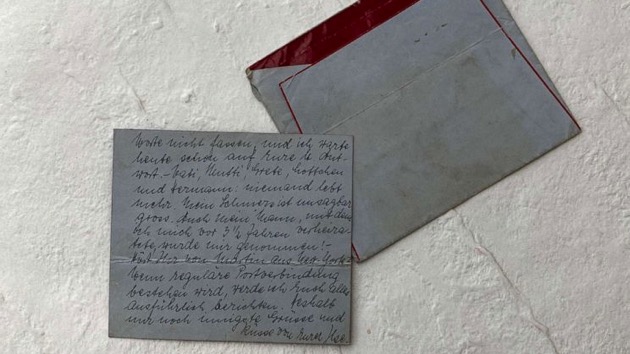 (NEW YORK) — Thrift stores, antique fairs and flea markets in New York City are prime spots for finding valuable, hidden family heirlooms. When Chelsey Brown, an avid thrifter, was shown a letter written more than 75 years ago at the end of the Holocaust by a survivor, she knew where it belonged.

“The second that I had it transcribed, I just knew it had to go back to the right family,” Brown said. She found the note in late 2021.

The letter was written by Ilse Loewenberg, a woman who jumped out of a moving train that was headed to the Auschwitz concentration camp in 1943. She was part of an underground Nazi resistance group called Gemeinschaft für Frieden und Aufbau, or the Association for Peace and Development.

According to later documentation from her sister, Loewenberg walked a three-day-long journey back to Berlin after escaping.

In 1944, she was recaptured and put in solitary confinement in Berlin until she was liberated by Russian troops in July 1945.

Loewenberg lost her mother, father, two sisters and husband in the Holocaust.

After she was freed, she wrote a letter to her living sister, Carla, who had immigrated to England prior to the war. Carla was the only sister and family member of Loewenberg’s to survive the tragedy.

“Through the kindness of our liberators, I am able to give you a sign of life from me after so many years,” Loewenberg wrote in German. “Dad, Mom, Grete, Lottchen and Hermann: no one is alive anymore. My pain is unspeakably big. My husband, whom I married 3.5 years ago, was also taken from me! … When there will be a regular mail connection, I will tell you everything in detail.”

That’s the letter that Brown bought from a flea market vendor.

Brown discovered the details of the family tree through MyHeritage.com, a global family history platform that retains historical records.

She discovered that both Loewenberg and Carla immigrated to the United States and settled in Forest Hills, New York, in 1948. Neither Loewenberg or Carla had children, but they did have extended families via their husbands.

Brown found Jill Butler, the daughter of Loewenberg’s brother-in-law’s brother. Butler and Loewenberg, who used to live near each other, were close before Loewenberg died in 2001.

When Brown sent Butler the letter, Butler and her family were moved.

“My whole family is truly in awe of all you have done for us,” Butler said in a letter back to Brown. “We all loved our Great-Aunt Ilse and are thrilled beyond words to read her thoughts in her own handwriting after she emerged from the depths of the European inferno.”

She added, “May God bless your noble work, and may you receive many blessings in return for all you do for families like mine.”

Brown, whose family also lost members in the Holocaust, now feels a deep connection to Loewenberg and said her story has inspired her.

“She’s a bit of inspiration for everyone to be better in life. After the war, Ilse actually sent supplies to the family that helped hide her in Berlin,” she said. “She really is an example of doing good in a world or being kind in a world that isn’t.”

Brown, who has done hundreds of heirloom returns, has said the stories have taught her a lot about life and relationships and that she wishes more people could be reconnected with family heirlooms.

“It does break my heart, because I’m sure that there’s a ton of items I could help reunite with her rightful families,” Brown said. “We shouldn’t be selling these items. It should be illegal. They should be going back to their families.”

She added, “The reason why people connected with my heirloom returns on social media is because it shows that there is magic in the lives of average people,” Brown said. “We each have our own unique ancestry and story, and I think that’s what our world and generation needs right now.”

Coldest Christmas in decades possible for parts of US: What to expect Christmas Eve

UVA shooting survivor speaking out ‘for my brothers I lost’