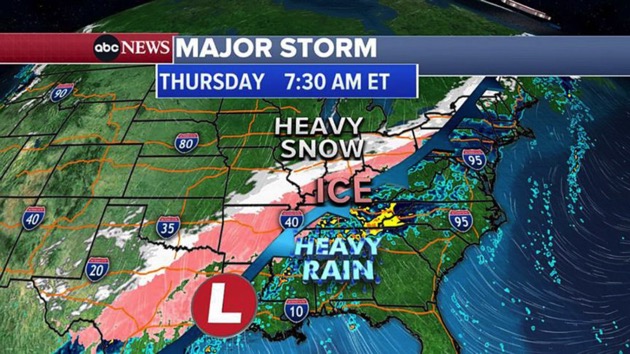 (NEW YORK) — A major winter storm is moving across the Heartland Wednesday, bringing snow from Denver to Chicago and ice as far south as Texas.

More than 1 foot of snow is expected from northern Missouri into Illinois, Indiana, Ohio and Michigan.

A winter storm warning has been issued in Chicago where 5 to 10 inches of snow is expected.

A winter storm warning was also issued in Denver where up to 6 inches of additional snow is forecast.

Denver schools are closed Wednesday due to the storm.

As of Tuesday night, 1,212 flights were already canceled for Wednesday due to the storm, with St. Louis, Chicago, Denver, Detroit and Kansas City seeing the biggest impacts.

In Missouri, Gov. Mike Parson has issued a state of emergency.

Further south, an ice storm warning has been issued from Memphis to Louisville, where the ice could be as thick as half an inch, sending trees toppling onto power lines.

A winter storm warning was also issued for Dallas where ice could make roads very dangerous.

The storm will then move into the Northeast Thursday night into Friday morning, bringing snow, sleet and freezing rain.

Over 1 foot of snow is possible in western Pennsylvania, upstate New York and parts of New England.

A winter storm watch has been issued for Boston, where residents are still digging out from last weekend’s massive snowstorm.

Dangerous ice accumulation is possible from Washington, D.C., to Philadelphia to New York City to Boston.

New York City will see rain on Thursday which will then change to freezing rain and some sleet on Friday morning. The National Weather Service warns that New York City Tristate region should be prepared for dangerous travel conditions on Friday.

Man, 21, with special needs shot three times, including in head, while waiting at bus stop in Chicago