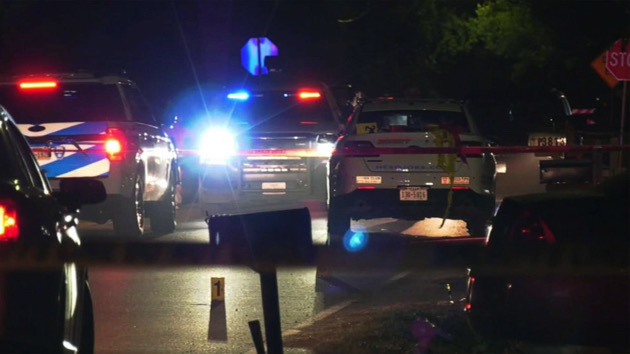 (HOUSTON) — Houston police are pleading with a gunman to turn himself in after he allegedly shot and killed his ex-girlfriend’s 9-year-old daughter.

The little girl was shot and killed at her home at about 10:45 p.m. Monday, according to Houston police.

The girl’s mom was shot in the upper body, police said. She is in stable condition and is expected to survive, police said.

The mother’s ex-boyfriend, 22-year-old Jeremiah Jones, has been charged with capital murder, police said. He remains at large and Houston Police Chief Troy Finner is urging Jones to turn himself in.

The 9-year-old was not identified but the chief said her death “hits home.”

“That sweet child was a student and member of our Police Activities Leagues (PAL) program,” he said in a statement. “We ask the community to pray for this angel, her mother and her family.”

Just 24 hours earlier and 15 miles away, 7-year-old Paul Vasquez was inside his home when authorities said he was shot and killed in a drive-by shooting in Harris County, which encompasses the Houston area.

The unknown gunman drove in front of a trailer home and opened fire at it around 10:45 p.m. Sunday, Harris County Sheriff’s Sgt. Jason Brown said.

Paul was shot in the chest, the sheriff’s office said. He was pronounced dead at a hospital, authorities said.

Paul’s mother and two brothers were home at the time but none of them were hurt, Brown said.

No motive is known and no suspects have been identified, authorities said.

The gunman’s car is believed to be a white or gray four-door sedan, authorities said.

These deadly shootings come one week after an 11-year-old girl was shot dead in a Detroit home by outside gunfire.

“This is the daily toll of gun violence … Let’s not accept daily gun violence as our norm,” he tweeted. “We can and we must do more.”

“Yes, we need more mental health resources … yes, we need to look at broader issues. But we cannot address gun violence and the gun violence epidemic without addressing the need for gun safety policies,” Hidalgo said at a news conference. “My hope is that as we do our work in Harris County we can work together as a state, we can work together as a nation, to finally tackle this.”

Harris County Commissioner Rodney Ellis added, “We owe it to these kids to keep them safe from gun violence.”

Man allegedly shoots wife with crossbow while she slept on sofa

88-year-old woman was gardening when attacked, killed by alligator