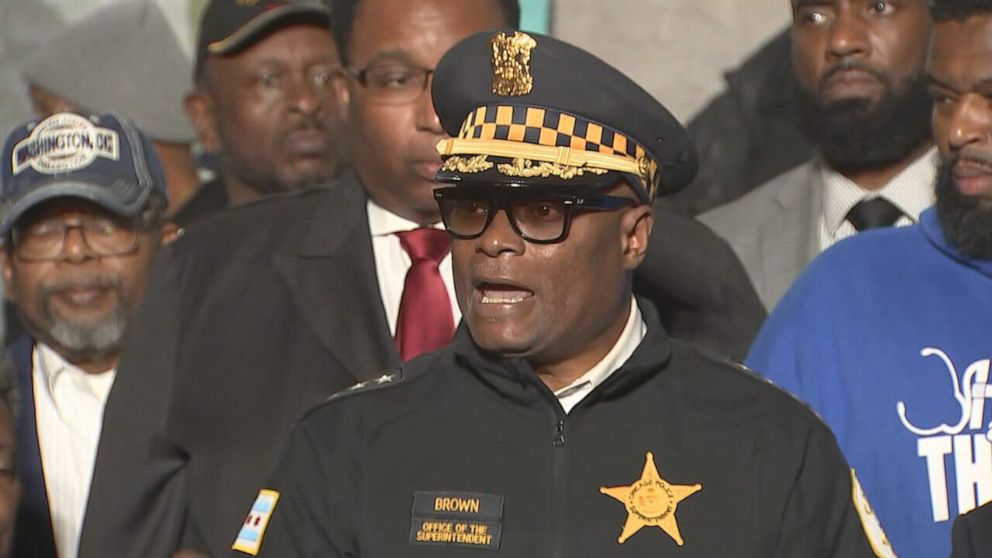 (CHICAGO) — Community members on Chicago’s West Side gathered for a prayer vigil on Wednesday evening after a drive-by shooting on Halloween night left 14 injured, including 10 members of the same family and three children. Another person was injured after being hit by a car on the scene, police said.

The shooting occurred on Monday night at around 9:30 p.m. in East Garfield Park, according to police, as people gathered to mourn a loved one who died from health complications.

A 3-year-old, an 11-year-old and a 13-year-old boy were among those shot, police said, and another person was injured after being hit by a car on the scene.

“The whole community is traumatized. This is some sick stuff that just happened around here. It’s not normal,” said Terry Young, vice president of Black Men United, a community service organization.

Young was joined at the podium by one of the shooting victims, just released from the hospital, and still using a walker after her injury. She only wanted to be identified by her surname Patterson, according to Chicago ABC station WLS.

“We must have an assault weapons ban. We must ban high-capacity magazines,” Lightfoot said while addressing the crowd at the vigil. “They’re literally tearing apart our kids, our families and our city.”

Lightfoot and Brown urged anyone with information on the suspects to come forward, issuing a stark warning to the shooters.

“It’s time for you to step up and turn yourself in,” Lightfoot said. “You are now the hunted. We have officers that are doing everything that they can around the clock to identify who you are and bring you to justice.”

Police are reviewing video of the incident and have some “strong leads” and are offering up to a $15,000 reward for any information leading to the arrest of those involved, Brown said, adding the people can submit tips to police anonymously.

Asked if police are searching for multiple suspects, a spokesperson told ABC News on Thursday that the investigation is ongoing.

“You can run but you cannot hide from the Chicago Police Department holding you accountable for this tragedy,” Brown said.

“The West Side, despite this tragedy, is still the best side,” Brown added. “You are a strong community. Hold your head high because we need you to stay strong.”

Brown told reporters on Tuesday that the investigation is still in its preliminary stages and police are not aware of a motive.

“We know it’s a drive-by, we know that it happened in just a few seconds. It begins and then it’s over by three seconds,” he said.

Amid the COVID-19 pandemic, shootings spiked in the city, according to Chicago Police Department crime statistics, but the most recent data shows that through Oct. 30, there have been 2,433 shooting incidents in 2022, a 19% decrease over 2021 and a 12% decrease compared with 2020.

Brown told ABC News’ Pierre Thomas in an interview that aired last month that Chicago police have also been taking an average of 12,000 guns off Chicago’s streets every year — including “ghost guns,” which are unregistered firearms that can be assembled from at-home kits.

“It’s the most complex policing landscape ever in this country’s history. We are making progress, but the complexities make it such that it is so fragile,” Brown told Thomas. “The ebbs and flows of violence are persistent.”