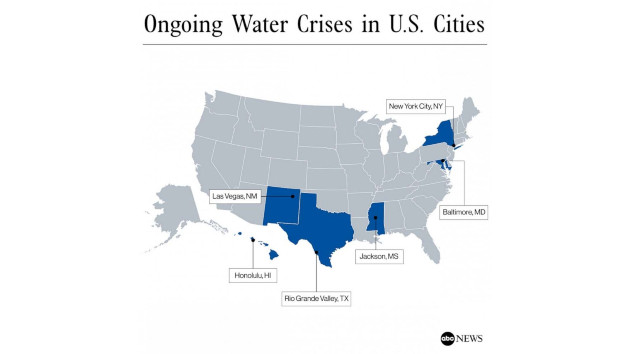 (NEW YORK) — Jackson, Mississippi, is not the first U.S. city to have a water crisis — nor is it likely to be the last.

However, the city’s crisis has highlighted the ongoing fight for access to clean drinking water, which continues to be at risk for Americans across the country.

Many of the cities or regions experiencing poor water access or conditions are in predominantly Black or Hispanic communities, according to data from the U.S. Census Bureau.

Most of the city’s 150,000 Jackson residents have been on a boil water notice since July 29 because the state Health Department found cloudy water that could cause digestive problems.

Many were left without water after a major pump at the city’s main treatment facility was damaged in late August. The water crisis was a result of decades-long neglect, with a failing water treatment system that had a history of equipment failures and issues, according to Jackson Mayor Chokwe Antar Lumumba.

The city could not produce water for necessities as important as fighting fires or flushing toilets. Residents lost access to water for roughly a week before water pressure was restored Monday. However, concerns about the water’s quality continue.

The Rio Grande Valley is facing pressure from an ongoing drought and a looming water shortage, so much so that the threat pushed two county judges to issue disaster declarations in August.

But it’s not just the Rio Grande Valley. In early August, Gov. Greg Abbott declared and renewed the disaster status of several counties over the drought. Reservoirs in the area are drying up, threatening the water supply for millions, as well as threatening the billion-dollar agriculture industry in the area.

The Texas Tribune reported that experts say that the region’s water supply may dry up by March 2023 for millions of people.

In November 2021, jet fuel leaked from a storage facility operated by the Navy, contaminating the drinking water of local Honolulu residents and sickening hundreds of families.

An investigation by the U.S. Pacific Fleet found that the water contamination was a result of the Navy’s “ineffective immediate responses” to the fuel releases at Red Hill. It listed the Navy’s failures in resolving “deficiencies in the system design and construction, system knowledge and incident response training.”

In a survey from the Centers for Disease Control and Prevention and Hawaii Department of Health, 87% percent of over 2,000 survey participants reported “at least one new or worsening health symptom following exposure to JP-5 jet fuel in the Navy water system.” The survey found 37% of respondents sought medical care and 17 people reported being hospitalized overnight.

According to the Environmental Protection Agency, many people remain in temporary housing due to the drinking water crisis. Healani Sonoda-Pale, a Hawaii sovereignty activist, says many are still afraid to drink the water. Protestors have called on the Navy to speed up its plan to defuel the facility that sits above the Southern Oʻahu Basal Aquifer.

The New Mexico city of roughly 13,000 people has been relying on reservoirs that had less than 50 days worth of stored water when Mayor Louie Trujillo declared the emergency in July.

The city’s water supply in the Bradner Reservoir had been tainted with large amounts of fire-related debris and ash following the Calf Canyon-Hermits Peak Fire. The large amounts of debris have prevented the city from pulling usable water from it, according to officials.

The countdown dropped to about 20 days of usable water when the city made moves to ensure a nearby lake can be used as a backup water supply with 200 million gallons of water, according to city officials. This supplies the city enough time to find solutions to water quality and accessibility issues.

A public housing complex in the city’s East Village is reported to have dangerous levels of arsenic in the tap water, according to ABC New York station WABC-TV.

More than 2,500 people in the New York City Housing Authority complex were told to stop drinking or cooking tap water.

According to WABC, NYCHA has yet to say what might have caused the high levels, however there has been speculation from residents about construction in the region.

Residents say they are terrified to use tap water to wash fruits and vegetables, let alone shower.

Baltimore residents have been urged to boil tap water after E. coli was discovered in several West Baltimore locations, affecting more than 1,500 people.

While the health department continues to perform leak detection and leak checks in the region, residents continue to haul water bottles and jugs home, with no insight into how long they’ll be without safe water.

Bodies of water all over North America are drying up due to drought, climate change: Experts