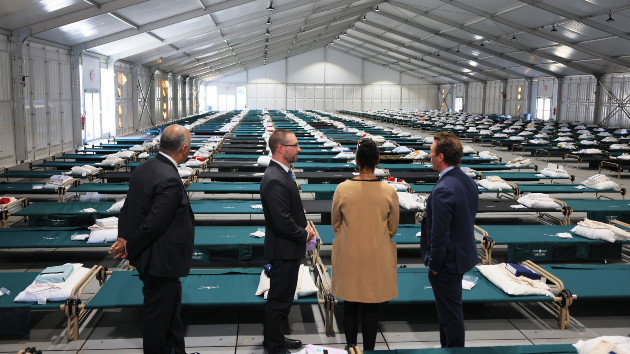 (NEW YORK) — In another sign New York City is grappling with an increase of migrants entering the shelter system, the city has officially opened a sprawling, 84,000-square-foot emergency shelter on Manhattan’s Randall’s Island.

ABC News and other outlets were given a first look inside the center, opening Wednesday, which has a total footprint of 6.4 acres encompassing dormitories, dining facilities, recreation centers and isolation centers for migrants that may contract COVID-19 or other communicable diseases.

The decision to open the center comes amid an effort spearheaded by Texas Gov. Abbott to bus migrants to Democrat-led cities.

While Abbott’s efforts have been criticized as a political stunt to call attention to a broken immigration system, a spokesperson for Mayor Eric Adams told ABC News that more than 20,500 asylum-seekers have moved through the shelter system since spring, with a majority of them arriving on buses from Texas.

“This situation is caused by political actors, as you know, and New York City is just having to respond and prepare for more people to arrive,” said Manuel Castro, commissioner of the NYC Mayor’s Office of Immigrant Affairs.

The center will house nearly 500 single male adults, but capacity can be increased if necessary. Other migrants, including families with children, are being placed at shelters and other temporary housing arrangements throughout the city. Case workers and other resources will be provided to migrants at the Randall’s Island facility so that they can figure out the next steps in their pending immigration cases and how to reach their intended destinations.

The mayor’s office is looking into obtaining funding from the state government to help migrants purchase transportation to where they have family in the United States or where they are required to show up to immigration court to proceed with their asylum claims.

New York City Emergency Management had already started building the facility at Orchard Beach in the Bronx, but severe rains that moved over the region in recent weeks proved the location to be a flood risk, and the facility was moved to Randall’s Island, just northeast of Manhattan.

NYC Emergency Management Commissioner Zach Iscol told reporters Monday that the decision to demobilize that location and install the facility on the island cost roughly $750,000.

Although officials aim to move migrants in and out of the center in under 96 hours, they will be allowed to stay longer on a case-by-case basis until they find more stable housing.

“New York City has had the need to open a welcome center big enough to have the capacity to welcome as many newly arrived immigrants, asylum-seekers,” said Castro. “We want to make sure that we’re able to meet all their immediate needs, which as you saw include medical attention, include an area to rest, take a shower, and most importantly, a way to connect to their loved ones. You want to help them to get to their final destination.”

Adams declared a state of emergency in the city earlier this month and said the migrant crisis would cost the city $1 billion. The city has appealed for help from the state and federal government.

“Although our compassion is limitless, our resources are not,” Adams said Oct. 7. “This is unsustainable.”