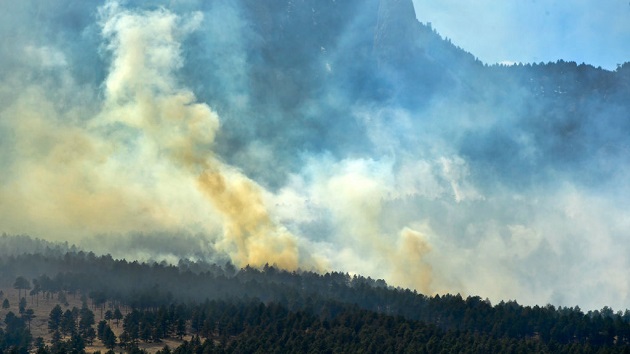 The Calf Canyon Fire and the Hermits Peak Fire in New Mexico have burned through more than 120,000 acres after they combined east of Santa Fe last week. The combined fire is only 10% contained, according to the U.S. Forest Service.

Overnight, the fire pushed north toward the cities of Cleveland and Mora, and there is a high probability that winds will push the blaze south of Mora on Monday, officials said.

Structure protection teams are working on all sides of the fire. Firefighters are working to create a dozer line behind some homes in the area as well as a strong fire break northwest of Las Vegas, New Mexico, with southeast heavy winds threatening to push fires further into that city. The fire is also burning near Las Tusas, New Mexico, officials said.

Fire risk remains critical across New Mexico and into parts of western Texas on Monday, with relative humidity forecast at only 5% and winds gusting up to 50 mph.

Dangerous fire conditions have persisted throughout the region over the past several weeks.

The Cooks Peak Fire in northern New Mexico has burned through more than 59,000 acres since it sparked on April 17 and is nearly 70% contained, according to officials.

Much of the West has been experiencing drought conditions for three consecutive years without any significant recovery in sight, according to the National Oceanic and Atmospheric Administration.

As global temperatures continue to rise, a decadeslong megadrought is expected to intensify and expand east, which will increase conditions for megafires to spark, according to officials.