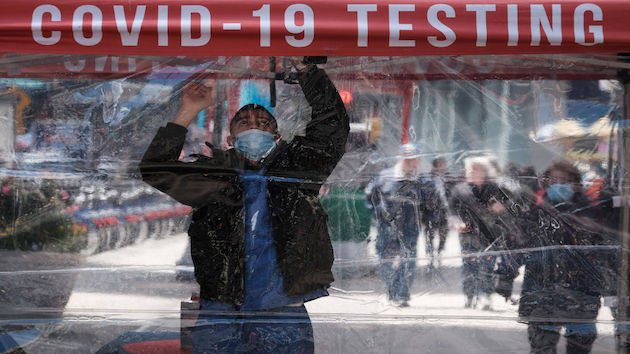 (NEW YORK) — Although COVID-19 infection and hospitalizations rates have been steadily on the rise across the United States, nowhere have the increases been more significant than in the Northeast.

Across the New England and greater New York and New Jersey regions, infection rates are nearing their highest levels in three months. COVID-19 related hospitalizations are increasing too — with daily admissions levels more than doubling in the last month.

Overnight, the Centers for Disease Control and Prevention updated its community risk levels, pushing many counties across the Northeast, particularly in New York and Massachusetts, to the “high” alert level. The “high” community level suggests there is a “high potential for healthcare system strain” and a “high level of severe disease”, and thus, the CDC recommends that people wear a mask in public indoor settings, including schools.

“If we were still using the original CDC COVID-19 risk classification, the northeast would be bright red, indicating uncontrolled community spread. This part of the country has some of the highest vaccination and booster rates, yet infections are still increasing,” Dr. Maureen Miller, professor of epidemiology at Columbia University’s Mailman School of Public Health, told ABC News.

Although Manhattan and the rest of New York City are still considered “medium” risk, transmission rates have increased by nearly 33% in the last 10 days. Much of upstate New York is also now colored in orange for “high” risk.

Suffolk County, home to the city of Boston, as well as six other surrounding counties in Massachusetts are also now considered communities at “high” risk. Across the greater Boston area, wastewater levels are at their highest point since early February, with 20 to 29 year-old residents reporting the highest numbers of infections.

In many areas of Vermont and Maine, community levels have also reached the high or medium risk threshold, data shows. And across the region, six Northeast states — Maine, Rhode Island, Vermont, Massachusetts, New York, and New Jersey — have the highest number of new cases, per capita, over the last week, of all 50 states.

“I do think that the wave we’re seeing is a real one, and probably much bigger than we appreciate. Since most cases of COVID-19 are not being reported — because people are testing at home or not at all — I wouldn’t be surprised to learn that the number of daily infections now is higher than during delta, maybe even winter 2020-21,” David Dowdy, an infectious disease epidemiologist at the Johns Hopkins Bloomberg School of Public Health, told ABC News.

Health experts say the increases are driven by a confluence of factors, including the easing of masking requirements and other COVID-19 restrictions, as well as highly contagious omicron subvariants, most notably, BA.1.12.1. The subvariant is projected to account for about 36.5% of cases nationwide and 62% of infections in the New York-New Jersey region. BA.1.12.1 is estimated to be between 30% and 80% more transmissible than the original omicron strain.

“It is becoming clear that the latest version of omicron BA.2 and its offspring BA2.12.1 can evade immunity developed as a result of an original omicron infection. Vaccination for those who were infected–even with omicron–is still highly recommended to prevent the severe outcomes experienced primarily by the unvaccinated,” Miller said. “The big game changer in how this wave plays out is human behavior. There is now a huge body of evidence that proves that mask wearing helps slow the spread of COVID-19… I wear a mask every time I enter an indoor public place, from the supermarket to an airplane. Life can go on, but you need to be smart about it.”

Amid looming questions surrounding a potential return of mask and vaccine mandates, New York City Mayor Adams said Friday that officials are closely monitoring the increases, reiterating that the city will be ready to “pivot and shift” should reinstating mitigation measures be deemed necessary.

When asked whether the city would consider reinstating its mask mandate for K-12 schools and proof of vaccination requirement, Adams insisted that the city is “not there yet.”

Adams lauded the city’s high vaccination and booster rates, as well as access to at-home tests, which he said is helping to prevent a significant surge in hospitalizations and deaths.

“It’s clear that if we moved into a high risk and high alert environment, we’d be seriously considering bringing those mandates back,” Vasan said on Tuesday.