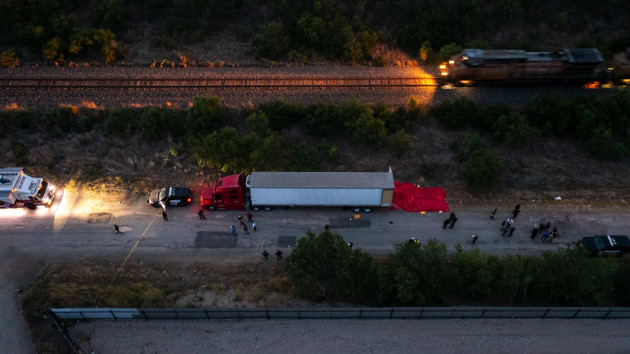 (SAN ANTONIO) — At least 51 people are dead after dozens were found inside a tractor-trailer in San Antonio, Texas, in a suspected case of human smuggling, local officials said Tuesday.

Of the 51 bodies in the custody of the medical examiner’s office, 39 are men and 12 are women, Rebeca Clay-Flores, the Bexar County Precinct 1 commissioner, said Tuesday. Some of those found are under the age of 18, likely teenagers, she said.

Mexican Foreign Secretary Marcelo Ebrard, citing information provided by U.S. authorities, said the death toll was at least 50, including 22 Mexican citizens, seven Guatemalan citizens and two Honduran citizens. The other victims have yet to be identified and Mexico is working with the U.S. on an investigation, according to Ebrard.

“We are in mourning,” Ebrard said in a statement Tuesday via Twitter. “Huge tragedy.”

At least 34 of the victims have been identified Tuesday afternoon, officials said at a press conference.

The incident unfolded in the south-central Texas city on Monday evening at around 5:50 p.m. local time, when a nearby worker heard a cry for help and found the tractor-trailer with the doors partially opened and the bodies of 46 people inside, according to San Antonio Police Chief Bill McManus and San Antonio Fire Department Chief Charles Hood.

An additional 16 people — 12 adults and four children — were transported to area hospitals in what officials called a “mass casualty event.”

Chris Magnus, the commissioner of U.S. Customs and Border Protection (CBP), told reporters he was “horrified” by the incident.

“Horrified at this tragic loss of life near San Antonio,” Magnus said Monday. “This speaks to the desperation of migrants who would put their lives in the hands of callous human smugglers who show no regard for human life.”

The trailer was refrigerated but did not have a visibly working air-conditioning unit and there were no signs of water inside, according to Hood.

Three people are in custody in connection with the incident, according to McManus, who added that the case is now a federal investigation. One of the suspects was a driver who was spotted fleeing the scene by an eyewitness who called 911, McManus told ABC News.

Hood told ABC News that the the smell of meat tenderizer, which was reportedly put on top of the bodies before the suspects fled, was overwhelming.

The victims taken to hospitals were hot to the touch and all suffering from heat stroke and heat exhaustion, Hood said. There were no child fatalities that authorities know of so far, he added.

“They suffered, horrendously, could have been for hours,” Hood said.

Hood said there were personal items near where the bodies were found, including prayer cards in Spanish and a new pair of Air Jordan’s.

President Joe Biden issued a statement Tuesday calling the deaths “horrifying and heartbreaking,” blaming the criminal smuggling industry for preying on migrants. Biden also highlighted the anti-smuggling campaign the U.S. has launched with its partners, saying they have made over 2,400 arrests.

“Exploiting vulnerable individuals for profit is shameful, as is political grandstanding around tragedy, and my Administration will continue to do everything possible to stop human smugglers and traffickers from taking advantage of people who are seeking to enter the United States between ports of entry,” Biden said.

A spokesperson for U.S. Immigration and Customs Enforcement (ICE) told ABC News that Homeland Security Investigations (HSI) responded to a call on Monday regarding an alleged human smuggling event and, upon arriving at the scene, confirmed the deaths of more than 40 people.

“HSI continues its enforcement efforts to ensure the safety and well-being of our communities. We will continue to address the serious public safety threat posed by human smuggling organizations and their reckless disregard for the health and safety of those smuggled,” the ICE spokesperson said in a statement. “To report suspicious activity, we encourage people to call the HSI Tip Line at 1-866-DHS-2ICE. All calls are kept confidential.”

“Details will be released as they are available, the criminal investigation remains ongoing,” the ICE spokesperson added. “HSI continues its enforcement efforts to ensure the safety and well-being of our communities.”

The San Antonio Fire Department confirmed to ABC News that HSI and CBP are taking over the investigation from local authorities.

CBP is the umbrella agency of the U.S. Border Patrol, which responded to assist at the scene and is supporting ICE in the federal investigation, according to Magnus, the CBP commissioner.

“We will be working with our federal, state and local partners to assist in every way possible with this investigation,” Magnus told reporters Monday night.

White House press secretary Karine Jean-Pierre said the Biden administration will “continue to take action to disrupt human smuggling networks which have no regard for lives.”

“Our prayers are with those who tragically lost their lives, their loved ones, as well as those still fighting for their lives. We are also grateful for the swift work of federal, state and local first responders,” Jean-Pierre told reporters Tuesday.

When asked about the criticism from Republicans, including Texas Gov. Greg Abbott, who say Biden’s border policies have led to dangerous journeys for immigrants, Jean-Pierre said the White House is focused on the victims and their families.

“But the fact of the matter is, the border is closed, which is in part why you see people trying to make this dangerous journey using smuggling networks,” Jean-Pierre said.

Homeland Security Secretary Alejandro Mayorkas took to Twitter to say that he was “heartbroken by the tragic loss of life today and am praying for those still fighting for their lives.”

“Far too many lives have been lost as individuals — including families, women, and children — take this dangerous journey,” he tweeted Monday night. “Human smugglers are callous individuals who have no regard for the vulnerable people they exploit and endanger in order to make a profit. We will work alongside our partners to hold those responsible for this tragedy accountable and continue to take action to disrupt smuggling networks.”

Earlier this month, the Department of Homeland Security released more details on the Biden administration’s efforts to combat human smuggling and unauthorized migration in conjunction with the Summit of the Americas held in Los Angeles.

The series of operations launched across the Western Hemisphere is part of the largest human smuggling crackdown ever seen in the region, with more than 1,300 deployed personnel and nearly 2,000 smugglers arrested in just two months.

Agencies from across the administration, including the intelligence community and the U.S. Treasury Department, have engaged to disrupt smuggling operations in real-time and strip down the financial backing of the transnational criminal organizations that coordinate these crimes.

“The Biden administration is focused on putting these organizations out of business,” DHS said in a recent statement prior to Monday’s incident. “But human smuggling is, by definition, a transnational problem and we are committed to working with our regional partners in the Americas to commit our collective expertise and resources to put an end to human smuggling.”

Foul fumes in South Jersey have been contained and identified, officials say

Three dead after home explodes in Indiana, officials say; cause under investigation

Three people dead after home explodes in Indiana, officials say; cause under investigation

3 people dead after home explodes in Indiana, officials say; cause under investigation