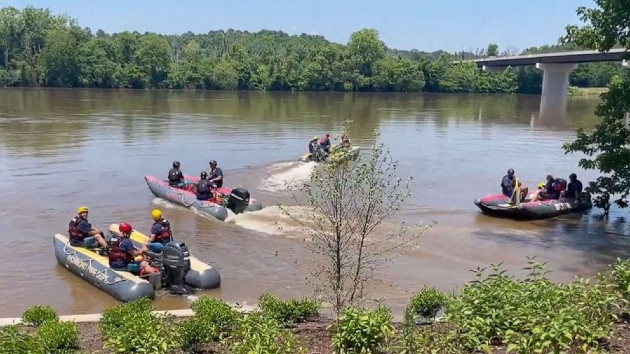 (NEW YORK) — One woman has died and another is missing after a group of 12 kayakers became stranded and then went over Bosher’s Dam in Richmond, Virginia, on Monday afternoon.

Ten kayakers were rescued shortly after the incident took place on the James River at around 3 p.m. local time, according to Richmond Fire Department Assistant Chief Jeffrey Segal. The dam has a 12-foot drop.

Two kayakers — identified by the Henrico County Police Division as Lauren Winstead and Sarah Erway — were initially deemed missing. Their last known location was where most of the kayakers were rescued. Winstead’s body was recovered from the James River on Wednesday afternoon, while the search for Erway has transitioned from a rescue mission into a recovery operation, police said.

The search and rescue mission for the missing women ceased Monday night because it was getting dark, Segal had said. The operation resumed the next morning.

“Our deepest condolences are with Ms. Winstead’s family during this difficult time,” police tweeted. “The search for Sarah Erway will continue and is transitioning from a search and rescue mission to a recovery operation.”

It was unclear if all the kayakers knew each other, according to Segal, and if they were all physically inside the kayaks at the time of the emergency.