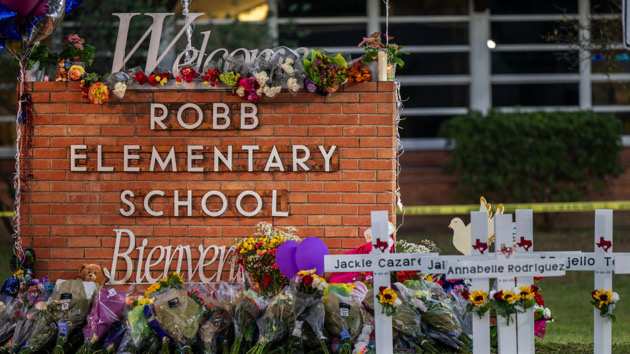 (UVALDE, Texas) — One month has passed since a gunman killed 19 students and two teachers at Robb Elementary School, and a series of new revelations about the May 24 shooting has done little to abate the frustrations of Uvalde’s residents as they continue to heal.

State and local officials have spent weeks trying to reconcile incomplete and, at times, conflicting reports on the shooting and the questionable police response. And while multiple investigations remain ongoing — including one being conducted by the U.S. Department of Justice — some critical facts remain elusive following one of the deadliest school shootings in the nation’s history.

Some information emerged this week when Texas Department of Public Safety Director Steven McCraw, whose agency is conducting one of the probes, testified before the Texas state legislature. McCraw, who presented an updated timeline of events that he said was based on video surveillance and police communications, characterized the police response as an “abject failure,” and offered what appeared to be the most complete account of what occurred during the deadly rampage.

In McCraw’s telling, enough officers and equipment arrived on the scene within three minutes to “neutralize” the 18-year-old shooter. He also made the stunning assertion that the door to the classroom containing the gunman might have been unlocked all along — even as officers waited more than an hour to find a key that would open it.

Police officers arrived on-scene almost immediately, but failed to overcome logistical and communications challenges in time to limit the carnage. McCraw said officers had difficulty communicating because their radios had no reception inside the building, contributing to a leadership vacuum that crippled the police response.

McCraw reserved his harshest criticism for Pete Arredondo, the embattled school district police chief who was the on-scene incident commander. McCraw called Arredondo “the only thing stopping a hallway of dedicated officers from entering” the classrooms and killing the gunman.

McCraw’s condemnation of Arredondo has added to a growing chorus of outrage over the police response on May 24. Emotional accounts from survivors and first responders before Congress and in the press have cast a critical eye on law enforcement.

“They’re cowards,” teacher Arnulfo Reyes, who lost 11 students and sustained multiple gunshot wounds, told ABC News in an exclusive interview. “They sit there and did nothing for our community. They took a long time to go in … I will never forgive them.”

Meanwhile, after several weeks of community members calling for Arredondo’s resignation, the Uvalde school superintendent on Wednesday placed Arredondo on administrative leave. Arredondo has not responded to multiple requests for comment from ABC News.

“He should never be allowed to work in law enforcement again,” one member of the Uvalde community told ABC affiliate KSAT on Wednesday. “My personal opinion.”

Many Uvalde residents say the shifting narrative has fostered an immense distrust of authorities — while the lack of information has provided little solace to relatives of the victims. A number of family members hope that an upcoming report from the county medical examiner will answer some of their most pressing questions.

“[The medical examiner] can tell us more or less what happened to our child. Was [her death] immediate or could she have been saved if [police] went in faster?” Kim Rubio, the mother of Uvalde victim Lexi Rubio, told ABC News’ Mireya Villareal. “I just think about how long she was there. Was she scared? Was she in pain? It just worries me.”

Demands for investigative documents also reached new heights this week, prompting a new round of infighting among officials.

Uvalde Mayor Don McLaughlin on Tuesday accused McCraw of “[having] an agenda, and it’s not to present a full report on what happened and to give factual answers to the families of this community.”

On Wednesday, a Texas state senator who represents Uvalde filed a lawsuit against McCraw’s agency seeking access to its investigative records. The Department of Public Safety did not respond to the lawsuit nor to McLaughlin’s criticism.

“From the very start, the response to this awful gun tragedy has been full of misinformation and outright lies from our government,” state Sen. Roland Gutierrez, a Democrat, wrote in an eight-page complaint.

During his Tuesday appearance before the state legislature, McCraw said the district attorney who covers Uvalde, Christina Busbee, told him to cease contact with lawmakers and the press. McCraw pledged to release investigative records and video surveillance footage of the shooting once Busbee approves their release.

Uvalde residents say they hope they won’t have to wait much longer.

Why archbishop turned to sign language to talk to Uvalde survivors

How some schools are addressing active shooter concerns after Uvalde