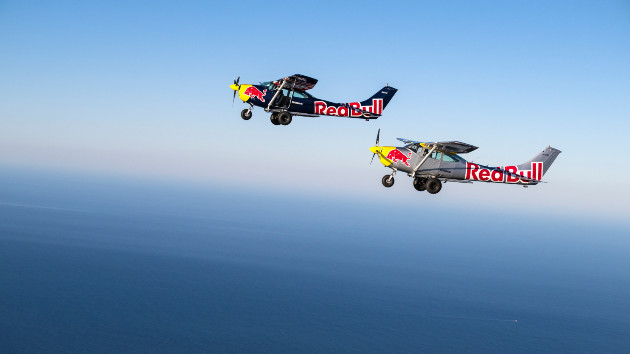 (NEW YORK) — All eyes will be up to the skies above California on Sunday as two cousins dare to accomplish a never-before-seen air stunt.

Luke Aikins and Andy Farrington — longtime pilots, skydivers and members of the Red Bull Air Force aviation crew — will attempt the first “plane swap,” where they will fly their planes close together, put them into a nosedive and then skydive into each other’s aircraft before making a safe landing.

Aikins said in a statement he was inspired to do the stunt 22 years ago after seeing a photo in an aviation magazine and has spent a long time preparing for this moment.

“It’s the pinnacle of my career, and my goal is to inspire the world and show that anything is possible. You can set your mind on something that at times seems wild, crazy and unattainable, but through ambition and creativity, you can make it happen,” he said.

The stunt, which will be livestreamed on Hulu on Sunday at 7 p.m. ET., includes multiple parts that have been planned out between Aikins, Farrington and their team of engineers.

The pair will take off in their own Cessna 182 single-seat aircrafts and fly to an elevation of 14,000 feet.

They will then pitch their planes into a synchronized nosedive, stop the engines and use a custom airbrake that will hold the planes in a controlled descent as they exit their own aircraft.

Aikins and Farrington will freefly skydive toward each other’s planes, catch up to the aircrafts, enter the cockpits, disengage the airbrake systems, restart the engines and take control of the planes.

Both pilots are no strangers to air daredevil acts.

Aikins set a new world record in 2016 by freefalling from an altitude of 25,000 feet without a parachute.

Hulu is owned by Disney, the parent company of ABC News.