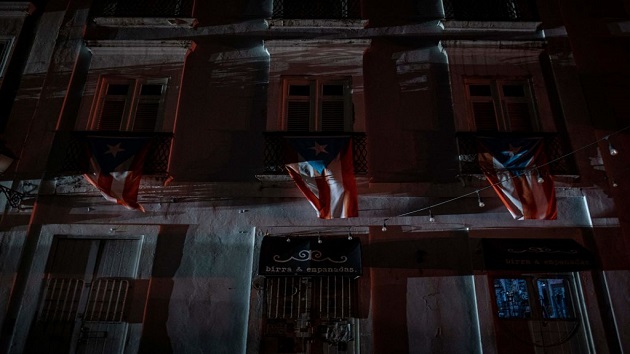 (NEW YORK) — Power was restored 90% customers in Puerto Rico as of 11 a.m. on Saturday, after a massive outage left 1.5 million customers without power, according to LUMA Energy, the company that took over transmission and distribution from the island’s power authority.

Power has been restored to 1.3 million customers, LUMA said.

LUMA said it will continue working to restore power to across Puerto Rico and asked customers to conserve their power usage on Saturday “to help reduce energy demand and support the restoration process until more generation is online.”

LUMA earlier warned that, “While electric service to parts of the island have been restored, some areas may experience temporary power loss for brief periods of time as we work to balance generation and stabilize the energy grid.”

The power outage came after a fire erupted at one of the island’s four main power plants. The exact cause of the interruption of service is under investigation, LUMA said.

“The extent of the outage has impacted each generating facility in Puerto Rico and a significant effort to restore service is underway,” LUMA said in a statement.

It will be weeks until officials know what caused the fire that knocked out power to Puerto Rico, the head of the island’s energy company told ABC News.

LUMA Energy CEO Wayne Stensby joined ABC News Live and described the electrical grid as being in “dramatically worse shape than any electric system that people in the mainland U.S.” would be serviced by.

Stensby said some of the same emergency response teams that have been brought on ahead of hurricane season are working to restore power to customers who are still in the dark.

Given how widespread the outage is, the government and the energy company said there is no timetable for full restoration.

“We are continuing to make progress in restoration but due to extensive damage at Costa Sur substation, we are not in position to provide an estimate of full restoration at this time,” LUMA said.

Public schools were closed to students on Thursday and Friday due to the outage, according to the island’s governor, Pedro Pierluisi.

Around 100,000 customers were also without water on Thursday due to the power outage, according to president of the Aqueduct and Sewer Authority, Doriel Pagán Crespo.

Only essential personnel are being summoned to central government agencies on Friday, Pierluisi said, in another tweet.

Addressing the upcoming hurricane season, Josue Colon, the executive director of the power company, said the electrical grid still needs to be reconstructed and that it would not be responsible for them to say that the island’s grid could withstand a hurricane like 2017’s category 5 Maria.