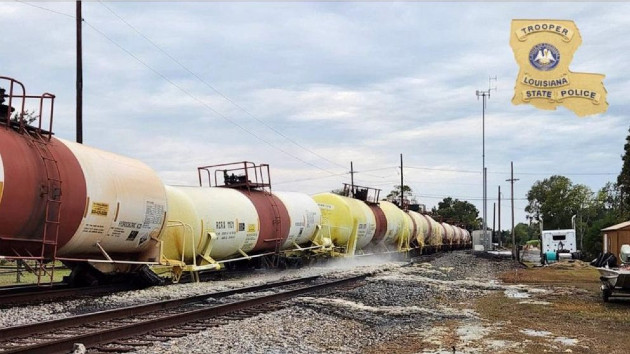 (NEW YORK) — Residents in a Louisiana parish were evacuated Wednesday after a train derailment caused an acid leak, officials said.

The derailment resulted in an acid leak, and residents in the immediate area have been evacuated, the St. James Parish government said.

The impacted railcar was holding approximately 20,000 gallons of hydrochloric acid, according to Louisiana State Police.

“Hazardous Materials crews, railroad personnel, parish officials and others are assessing the extent of a leak on one railcar,” Louisiana State Police said in a statement. “Crews will continue to monitor the leak with perimeter air monitoring.”

All streets within the exclusionary zone are closed, the St. James Parish Sheriff’s Office said.

“If you have elderly families who do not have social media please contact them and get them to evacuate,” the sheriff’s office said on social media.

A shelter has been set up at a local senior center for those who live within the evacuation zone.

Authorities have not said what caused the derailment or identified the railroad company involved.

Nearly 27% of inmates in Louisiana custody were held past release dates: DOJ

Sacramento County warns residents amid storms: ‘Get out now’