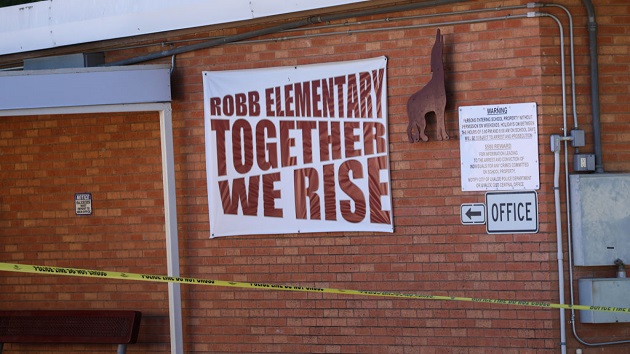 (UVALDE, Texas) — A Robb Elementary School employee triggered an internal alert system less than a minute before a gunman entered the building in Uvalde, Texas, and opened fire, according to the company that makes the alert system.

The alert was initiated using a security app on the employee’s mobile phone at 11:32:26 a.m. on May 24, a spokesperson for the company, Raptor Technologies, confirmed to ABC News Friday. That was two minutes after the first 911 call, based on the timeline from law enforcement officials.

The shooter entered the school at 11:33 a.m., according to Col. Steven McCraw, director of the Texas Department of Public Safety.

The employee pressed a “lockdown” button and a button that warned of an active shooter, according to Raptor Technologies. The system then blasted out emails, text messages and cellphone alarms to other school employees.

Robb Elementary School posted to Facebook at 11:43 a.m. that the campus had gone under lockdown “due to gunshots in the area.”

The security app information, first reported by The New York Times, helps answer initial questions about whether the school had enacted any of its emergency protocols when confronted with a gunman on the property.

A teacher who saw the shooter approach the school armed with a gun called 911 and shut a door to the school which for some reason did not lock, authorities said. Law enforcement is looking into why the door did not lock, the Texas Department of Public Safety confirmed to ABC News.

The shooter entered the school through the unlocked door, walked into a classroom and opened fire using an AR-15-style rifle, ultimately killing 19 students and two teachers, authorities said.

The suspected gunman, 18-year-old Salvador Ramos, was shot and killed by responding law enforcement at the scene.