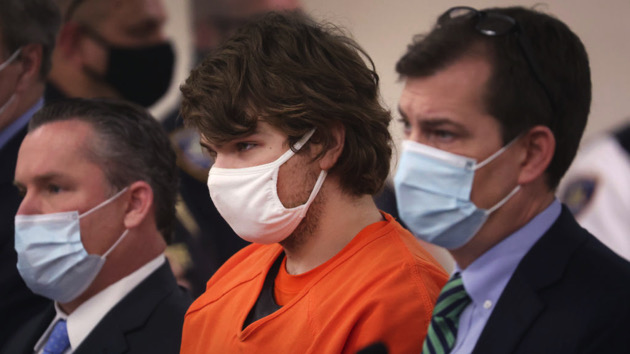 (BUFFALO, N.Y.) — The white teenager charged with killing 10 Black people in a Buffalo, New York, supermarket in what prosecutors described as a racially motivated mass shooting, is set to appear Thursday at a state court hearing.

The status hearing for 18-year-old Payton Gendron is scheduled for 2 p.m. in Erie County Court in Buffalo.

Gendron has pleaded not guilty to a 25-count indictment, including 10 first-degree murder charges and three attempted murder charges stemming from the May massacre at a Tops market.

The teen is the first person in New York history to face a charge of domestic act of terrorism motivated by hate in the first degree, a crime enacted in the state in November 2020. If found guilty of that charge, Gendron faces a sentence of life in prison without the possibility of parole, Erie County District Attorney John J. Flynn said at a news conference last month.

The charges against Gendron reflect the white supremacist rhetoric and invective law enforcement sources told ABC News investigators was found on social media posts linked to the suspect, including a belief in the racist conspiracy theory known as replacement.

Gendron is accused of fatally shooting the six women and four men inside a Tops supermarket on May 14 “because of the perceived race and/or color” of the victims, according to the indictment. He also allegedly shot and wounded three people.

Flynn noted last month that two of the three victims who survived the shooting are white, but that attempted murder charges with a hate crime enhancement were filed on behalf of all the wounded victims because of Gendron’s “alleged intent.”

U.S. Attorney General Merrick Garland said last month that at one point during the attack, Gendron allegedly aimed his AR-15-style rifle at a white Tops employee, who was shot in the leg and injured. Garland alleged that Gendron apologized to the victim before continuing the attack.

Investigators allege Gendron drove three hours from his home in Conklin, New York, and spent the day before the rampage conducting a final reconnaissance on the store before committing the mass shooting on a Saturday afternoon.

Authorities allege Gendron was wielding an Bushmaster XM rifle, dressed in military fatigues, body armor and was wearing a tactical helmet with a camera attached when he stormed the store around 2:30 p.m., shooting four people outside the business and nine others inside. Police said the suspect fired a barrage of more than 50 shots during the massacre.

Gendron allegedly livestreamed the attack on the gaming website Twitch before the company took down the live feed two minutes into the shooting.

Among those killed was 55-year-old Aaron Salter Jr., a retired Buffalo police officer who was working as a security guard at the supermarket. Authorities said Salter fired at the gunman, but the bullets had no effect due to the bulletproof vest the suspect wore.

During his first appearance in federal court on June 16, a magistrate judge urged federal prosecutors to quickly decide whether to seek the death penalty Gendron, citing the expense to taxpayers of defending a death-eligible defendant. Prosecutors told the judge they will inform their superiors of his request, but a decision has yet to be announce on whether federal prosecutors will seek capital punishment.