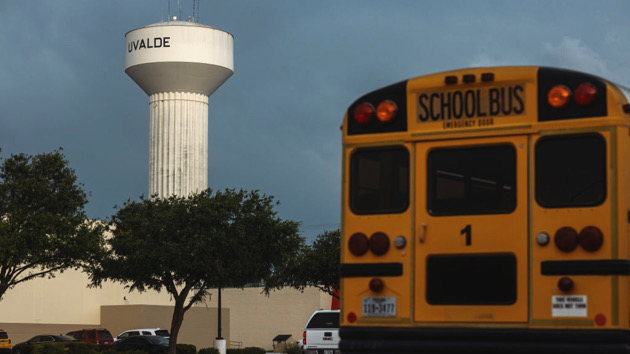 (UVALDE, Texas) — The suspect in the Robb Elementary School shooting, Salvador Ramos, turned 18, purchased two rifles and carried out the second-worst school shooting in U.S. history — all within a span of eight days, authorities said.

He also sent messages on social media in recent days with images of firearms, according to screenshots of alleged messages being reviewed by law enforcement as well as a user who received direct messages from the alleged shooter.

Prior to recent days, the shooter exhibited unusual behavior such as threatening classmates and claiming to have cut scars into his face, his classmates at Uvalde High School told ABC News.

The shooter’s classmates told ABC News the suspect was known for fighting and threatening fellow students.

Nathan Romo, who said he was once friends with Ramos, told ABC News the suspect once threatened to kill him.

“I used to be his friend, and I told him I was going to stop being his friend because he was being weird with not only me but with a lot of other people,” Romo said.

Several other classmates told ABC News the shooter rarely went to school and when he did, he sometimes frightened other students.

“He had scars on his face and I remember somebody asking him ‘what happened, are you okay?’ ‘Cause he showed up to school with them and he just straight out told them — with a smile — I did them myself cause I like how it looks,” Yarelli Vasquez, one of the suspect’s classmates, told ABC News.

Investigators are looking over the suspect’s social media accounts, where he allegedly left disturbing social media posts, and reportedly sent videos and photos of guns and images of animal abuse to other users.

Since the attack, law enforcement is also reviewing screenshots of alleged messages from the suspect to one Instagram user, who posted them publicly on her account after the shooting.

As recently as Tuesday morning, an Instagram account that law enforcement sources told ABC News they believe is connected to the shooter, sent another user on the social media platform a photo of a gun laying on a bed, according to a user who shared direct messages from the suspect’s alleged account with ABC News.

An individual who said they knew the accused gunman through the social media platform Yubo, told ABC News that the suspect had turned on his video last week on the platform and showed himself with guns.

On Monday, the individual said, the shooter was on the platform making statements including “wait till tomorrow.”

“No one took him seriously,” another user told ABC News.

The suspect began by shooting his grandmother before heading to the school, according to police. She is in critical condition.

The suspect crashed a car belonging to his grandparents outside Robb Elementary School, according to multiple law enforcement officials. The suspect did not know how to drive and did not have a driver’s license, his grandfather told ABC News.

The suspect emerged from the car with an AR-15-style rifle and was immediately engaged outside the building by law enforcement. The suspect shot an officer, sources told ABC News.

The suspect, wearing body armor, proceeded inside the school through the south doors where he opened fire, killing at least 19 students, who were mainly third and fourth graders, and two teachers, according to sources.

Inside, the suspect traded fire with law enforcement.

Law enforcement officials recovered the AR-15-style rifle that the Bureau of Alcohol, Tobacco, Firearms and Explosives is now tracing. They also recovered the body armor and numerous magazines.