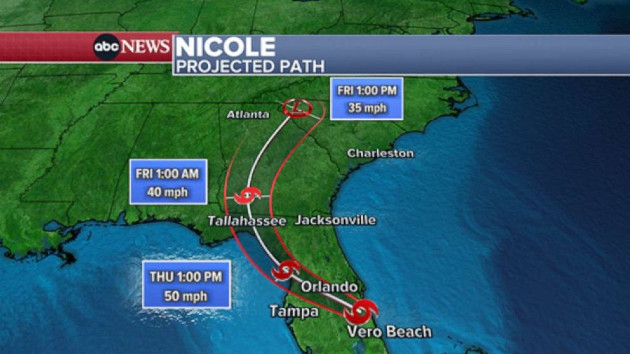 Despite the incoming storm, NASA announced in a statement on Monday evening that its Space Launch System (SLS) rocket would remain on launchpad 39B at the Kennedy Space Center, citing “current forecast data.” In another statement on Tuesday evening, NASA said that the $4.1 billion test flight — the opening shot in the space agency’s Artemis moon-exploration program — “is designed to withstand” 85 mph winds.

“Current forecasts predict the greatest risks at the pad are high winds that are not expected to exceed the SLS design,” the agency added. “The rocket is designed to withstand heavy rains at the launch pad and the spacecraft hatches have been secured to prevent water intrusion.”

NASA had been aiming for a third launch attempt on Nov. 14 but is now looking at Nov. 16, “pending safe conditions for employees to return to work, as well as inspections after the storm has passed,” the agency said.

Nearly 330,000 customers were without power across Florida on Thursday morning due to Tropical Storm Nicole, according to data collected by PowerOutage.us.

A “few” tornadoes are possible over parts of coastal east-central and northeastern Florida on Thursday morning, according to the National Weather Service.

The tornado threat will spread northward across parts of southeastern Georgia and the Carolinas later Thursday through Friday morning.

Meanwhile, “large” swell waves generated by Nicole will affect the northwestern Bahamas, the east coast of Florida and much of the southeastern U.S. coast during the next few days.

“These swells are likely to cause life-threatening surf and rip current conditions,” the National Weather Service said in a public advisory on Thursday morning.

A “dangerous” storm surge from Tropical Storm Nicole combined with the tide will cause normally dry areas near the coast to be flooded by rising waters moving inland from the shoreline, according to the National Weather Service.

If the peak occurs at the time of high tide, the National Weather Service said, the water could reach up to 5 feet above ground from Florida’s Jupiter Inlet to Georgia’s Altamaha Sound, from Florida’s St. Johns River to the Fuller Warren Bridge, and from Anclote River to Ochlockonee River in Florida.

“The deepest water will occur along the immediate coast near and to the north of the landfall location, where the surge will be accompanied by large and destructive waves,” the National Weather Service warned in a public advisory on Thursday morning.

“Flash and urban flooding will be possible, along with renewed river rises on the St. Johns River, across the Florida Peninsula today,” the National Weather Service added. “Heavy rainfall from this system will spread northward across portions of the Southeast, upper Ohio Valley, Mid-Atlantic, and New England today through Saturday, where limited flooding impacts will be possible.”

The center of Tropical Storm Nicole is expected to move across central Florida on Thursday morning, possibly emerging over the far northeastern Gulf of Mexico on Thursday afternoon, then move across the Florida Panhandle and Georgia on Thursday night and Friday, according to the latest forecast from the National Weather Service.

Although “additional weakening” is in the forecast, the National Weather Service warned on Thursday morning that “Nicole remains a large tropical storm” and “strong wind, dangerous storm surge and waves, and heavy rains continue over a large area.” Tropical storm-force winds extend outward up to 450 miles from Nicole’s center, especially to the north. Sustained winds of 49 mph with a gust of 70 mph were reported early Thursday in Daytona Beach, Florida.

More than 215,000 customers were without power across Florida on Thursday morning due to Tropical Storm Nicole, according to data collected by PowerOutage.us.

More than 175,000 customers were without power across Florida early Thursday morning, as Tropical Storm Nicole moved inland over the Sunshine State, according to data collected by PowerOutage.us.

The National Weather Service issued a tornado watch for northeastern Florida and southeastern Georgia on Thursday morning, in effect until 1 p.m. local time.

Brief spin-up tornadoes are common in tropical storm systems, so more watches could be issued throughout the day.