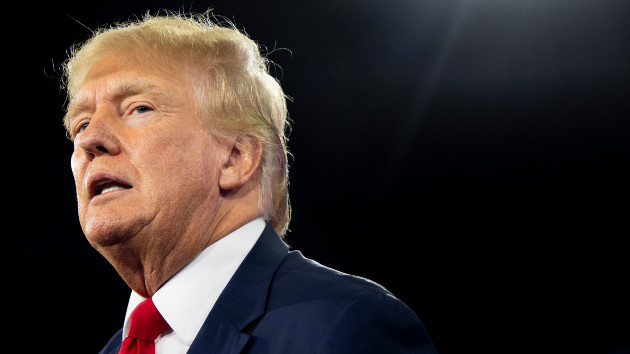 (NEW YORK) — Donald Trump on Wednesday indicated he invoked his Fifth Amendment protection against testifying against himself during a scheduled deposition that day as part of the New York attorney general’s civil investigation into his family real estate business.

The former president was seen arriving at the attorney general’s office in New York City around 9 a.m. local time.

In an emailed statement to reporters about an hour and a half later, Trump said, in part, “Under the advice of my counsel … I declined to answer the questions under the rights and privileges afforded to every citizen under the United States Constitution.” His statement also included lengthy attacks on the state attorney general’s investigation.

A source with knowledge of the matter subsequently confirmed to ABC News that Trump was declining to answer questions from investigators.

As of early Wednesday afternoon, Trump remained at the attorney general’s office — across the street from one of the Trump-branded buildings included in the civil investigation.

The deposition in the civil case follows an escalation in a separate federal investigation into Trump’s handling of classified material. On Monday, the FBI searched Trump’s residence in Palm Beach, Florida.

Wednesday’s deposition, which had been delayed from July due to the death of Trump’s ex-wife Ivana, comes after a months-long court fight during which Trump was held in contempt as he fought the attorney general’s subpoena.

Trump has denied any wrongdoing and has called the investigation politically motivated.

“My great company, and myself, are being attacked from all sides. Banana Republic!” he said in a statement on his social media outlet, Truth Social, shortly before Wednesday’s deposition.

Two of his grown children, Donald Trump Jr. and Ivanka Trump, have already been deposed as part of the civil probe, sources said.

Trump argued unsuccessfully that he should not have to sit for a deposition while the Manhattan District Attorney’s Office was conducting a parallel criminal investigation. While the Manhattan DA’s case remains active, two senior prosecutors who had been leading it resigned earlier this year over the lack of an indictment.

James has said her office uncovered evidence of potentially fraudulent conduct in the way the Trump Organization valued its real estate holdings when seeking loans and when asking for tax breaks.

Lawyers in her office have said in court that the office is nearing a decision on an enforcement action.

ABC News’ Will Steakin contributed to this report.

Judges reluctant to say Trump was acting as president when he allegedly defamed E. Jean Carroll