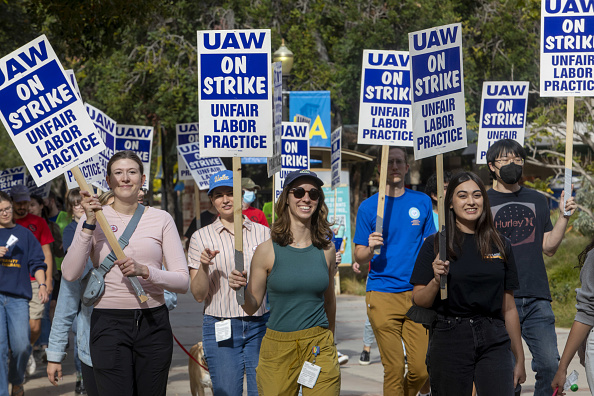 (LOS ANGELES) — Fifteen days into a strike across University of California system campuses, academic researchers and postdoctoral scholars have reached tentative agreements which include wage increases that reflect the cost of living, the United Auto Workers announced Tuesday.

Postdocs and academic researchers said they would continue the strike in solidarity with academic student workers and student workers who have not yet voted to ratify proposed agreements, according to UAW.

Workers going on strike accuse the university system of failing to support a diverse workforce, which they say undermines the quality of research and education. Workers say the university’s compensation does not match the cost of living and claim the inequitable working conditions are pushing scholars out of academia, according to their website.

The agreement will be on new five-year contracts effective through Sept. 20, 2027, according to the University of California system.

There will also be annual pay increases from 2024 to 2027 that vary based on experience, according to UAW.

Postdocs will also now receive eight weeks of paid parental and family leave, double the 4 weeks they had prior to the agreement, according to UAW.

The university system also said it would agree to negotiate reduced fee or no-fee access to regional transit systems.

Most academic researchers will receive 29% salary increases, which will vary by scale and merit, over the life of their contract. They will now receive full parental and family leave for eight weeks, compared to 70% pay which they currently receive, according to UAW.

Student researchers last made a compensation proposal to UC 12 days ago but the system has not yet responded, according to UAW.

“We are proud to have reached agreements that address the soaring cost of living, and reflect the value of our contributions at UC,” said Neal Sweeney, president of UAW Local 5810.

“These agreements represent a new, best-in-class model that will improve quality of life – and the quality of research – for scientists across the US. It is now time for UC to make serious proposals to Academic Student Employees and Student Researchers and to reach fair agreements that recognize the contributions these workers make,” Sweeney added.

“Our dedicated colleagues are vital to UC’s research activities and we are very pleased to have reached agreements that honor their many important contributions,” said Letitia Silas, executive director of systemwide labor relations. “These agreements also uphold our tradition of supporting these employees with compensation and benefits packages that are among the best in the country.”

DOJ charges 3 in ‘murder for hire’ plot against Iranian journalist