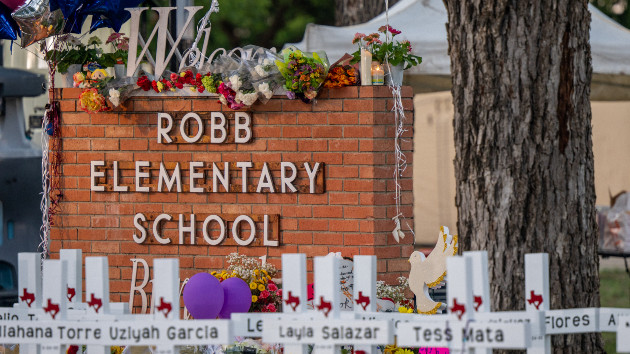 (UVALDE, Texas) — Voters across Texas will be heading to the polls for the midterm election on Nov. 8, but few other counties in the state have garnered more national attention than Uvalde. Since May 24, when a 18-year-old gunman killed 19 students and two teachers at Robb Elementary School, Uvalde has been the epicenter of a national debate about gun safety.

Since the shooting, the parents of some of the victims have rallied locally and in Washington, D.C., with some parents testifying in front of Congress, calling for gun reform measures they say will prevent another massacre.

But even as Democrats have tried to make inroads in the county, the chairs of both local party organizations say the fallout of the shooting has further divided the Uvalde community along party and social lines.

“I think you always had that subtle division. It has been divisive since Trump got elected, but I think more than anything, the Robb tragedy put the right a little bit more defensive in their corner and protective of themselves,” said Carlos Lopez, Uvalde’s Democratic chairman. “You saw that through the different actions of DPS and other traditionally conservative type occupations.”

In their attempt to hold officials accountable for the shooting, some parents of the victims have been engaged in months of protests and advocacy both at the local and national levels. Some of the protests have been aimed at the Uvalde Consolidated Independent School District’s police force, whose officers were among the law enforcement officials that waited over an hour outside of a classroom before they attempted to stop the shooter, according to a state investigation.

Former Texas Department of Safety trooper Crimson Elizondo, who was the first person to enter the hallway outside the classroom as the shooter committed the massacre, was fired in October from a Uvalde school district post she had recently been hired for. Elizondo had been under investigation for her conduct during the shooting.

Sgt. Juan Maldonado, a Texas state trooper who was among the first to respond to the shooting, was also fired last month by DPS after an investigation into his response to the unfolding massacre.

UCISD Superintendent Hal Harrell recently announced his retirement, although he told the Uvalde Leader News in an interview that his resignation was not directly caused by the shooting.

Lopez said some of the parents were discouraged by a recent school board meeting where some of the former superintendent’s supporters demonstrated in his favor. Many of those supporters have not joined the parents’ calls for accountability in the deaths of their children, he said.

“I said ‘listen this is exactly what is supposed to occur.’ They’re not used to the status quo being challenged and you’ve instituted changes. It feels like dominoes, knocking them down and falling down like that,” said Lopez. “I think it makes them feel uncomfortable that they’re bucking the system, they’re going against the establishment of what has traditionally been in Uvalde.”

O’Rourke has joined the parents’ calls for stricter background checks and raising the minimum age to purchase assault weapons to 21 and has joined protests organized by the parents. O’Rourke confronted Abbott at a press conference after the shooting and accused him of “doing nothing” to prevent another massacre.

Abbott has met with some of the families since the massacre, but has not heeded their call for gun reform.

“The Governor has been to the community every month since the tragedy,” a spokesperson for Abbott told ABC News in August.

Lopez said the parents’ advocacy is making a strong impact on communities across the country and at home. He said more volunteers have signed up to canvas for Democrats than in previous years. The shooting has also prompted Javier Cazares, the father of 9-year-old Jacklyn Cazares who was killed in the shooting, to run for local office. Cazares is running as an independent write-in candidate for county commissioner.

Rhonda Vigil, Uvalde County’s Republican chairwoman, said voters in the county are heading to the polls because they are ready for a change in local leadership and are seeking justice for the victims, but she believes the Democrats’ focus on gun reform will not resonate in a county where guns are ubiquitous.

“Uvalde may be strong, but we are definitely not united,” Vigil said, referring to the slogan printed on signs and T-shirts throughout the city.

Vigil said Democrats like O’Rourke are the ones to blame for that division.

“He is just here for them to vote for him and they’re never going to see them again. He’s using the families as puppets,” she said.

Vigil said she and her husband were offended when someone posted a photo on social media showing some of the parents flipping off one of Abbott’s campaign signs.

“We want to support the families, and we do have your back, but we cannot hang around with you and go places with you, if you’re going to be ugly and be in people’s faces and demand stuff in the way you’re demanding,” Vigil said.

Just hours before the first and only debate for the gubernatorial race at the University of Texas Rio Grande Valley in Edinburgh, Texas, O’Rourke held a community event with Uvalde families who traveled there to support him.

During the debate, Abbott said any attempt to raise the legal purchasing age will be met “with it being overturned” and that he aims to address “what is really ailing our communities” which he said was mental health issues. He said he supported expanding background checks to include juvenile records, but is against “red flag” laws that allow authorities to bar people from purchasing guns if they pose a danger.

O’Rourke sidestepped questions on whether he supported confiscating AR-15-style weapons as he focused on what he says he believes he can get done as governor: raising the minimum age of purchase to 21, implementing red flag laws and requiring universal background checks for all gun purchases.

Dr. Arturo Vega, a political professor at St. Mary’s University in San Antonio, said Democratic talking points on gun reform may not move the needle much in a small rural county like Uvalde, but may have a larger impact in more urban areas.

“From a statewide race the Democrats are using it as a way to galvanize and mobilize lots of urban county voters, lots of young first time, college students, voters,” Vega said.

Over 18% of eligible voters in Uvalde have voted early, according to state data. Among them is Kimberly Mata-Rubio, mother of 10-year-old Lexi Rubio, who was killed in the shooting. Mata-Rubio appeared in one of the ads supporting O’Rourke.

O’Rourke is expected to hold a “Vote with Beto” rally on Wednesday in Uvalde, just six days before Election Day. Abbott won the county with roughly 60% of the votes in 2018 against Democratic challenger Lupe Valdez. Uvalde also went for Abbott in 2014, when he first ran for governor.

Regardless of how Uvalde County votes next week, Lopez said he’s hopeful that the parents of Uvalde victims will continue to have a large impact on the country.