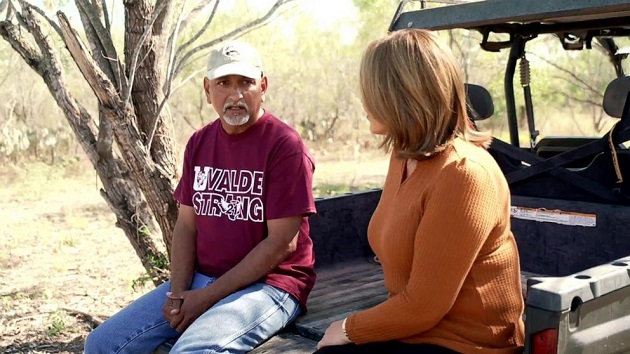 (UVALDE, Texas) — Nearly six months after a gunman armed with an AR-15 killed 19 students and two teachers at Robb Elementary School in Uvalde, Texas, the community remains divided on the topic of gun control.

Many of Uvalde’s families have grown up hunting, so guns have been built into the county’s culture and economic lifeblood for generations.

But the May 24 school shooting has left some longtime residents and gun owners rethinking their views. Jesse Rizo, a Uvalde rancher who lost his 9-year-old niece Jackie Cazares in the shooting, told ABC News that the shooting showed residents that they need to take a head-on approach to address the problem.

Some residents, however, contend the shooting may prompt gun control actions that they say go too far.

“I really, I really don’t feel like banning any gun is going to solve any problem,” Jason Molitor, who owns Ox Ranch, an exotic-game hunting property outside of Uvalde, told ABC News.

Uvalde:365 is a continuing ABC News series reported from Uvalde and focused on the Texas community and how it forges on in the shadow of tragedy.

Rizo and other gun control advocates contend that the solutions they’re pushing for won’t be a burden for those businesses and will save lives.

Rizo, who has been vocal in town meetings and rallies over the past six months, said that the difference in opinions on gun control is part of the pain that the Uvalde community is facing since the massacre.

“I don’t know one person here who didn’t grow up without a weapon at a young age. All of us. All my friends,” he said.

Molitor said he held his first firearm when he was 5 and shot his first deer three years later. The rancher said he uses his AR-15s to hunt hogs, contending that the assault rifle is the best way to shoot the passel.

“We consider the pigs as an invasive species, a nuisance, and they multiply,” he said. “You want the larger capacity magazines so we can try to get more of them.”

Molitor, who noted that one of his ranch employees lost his son in the Robb Elementary shooting, said he supported some gun control policies such as raising the age to purchase a firearm and more background checks, but he opposed proposals to ban assault rifles.

He said such a move could affect his business and other hunting ranches in the area, which he estimated drives $10 million to $12 million into the Uvalde economy.

“We’d like to see something done to stop [mass shootings] from happening, but as far as starting to take guns and guns rights away from people? That’s just a slippery slope that I think really concerns a lot of gun owners,” Molitor said.

Gun control activists and some of the families impacted by the shooting have called for policies such as banning assault rifles like the one used in the shooting, increasing the legal age for purchasing a firearm and stricter background checks.

Rizo said arguments about taking a person’s gun away are scare tactics spread by the opponents of control policies.

He added that the shooting and the death of his niece made him and his family see the issue in a different spectrum, and he urged other residents to hear the families out.

“The main focus should be on the children and on the teachers that lost their lives that day. If you can keep that as your compass and as your guiding light, then that’s what’s important,” Rizo said.

Rizo acknowledged that it will take a lot of time and a lot of work before residents can find that common ground on gun control, but he said, “with patience, people begin to understand each other.”

In the meantime, Rizo said he is considering donating his hunting ranch and turning it into a memorial for the Robb Elementary victims.