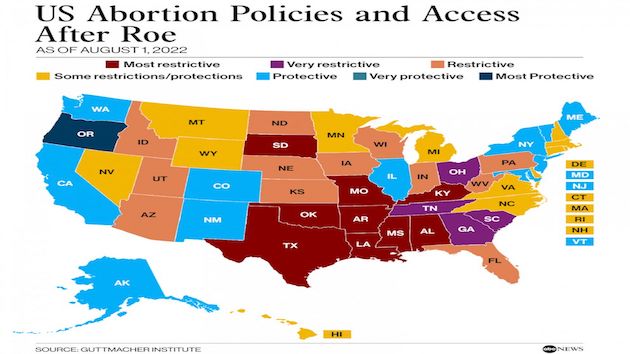 (NEW YORK) — After Kansas voters decisively rejected a bid to remove abortion protections from its state constitution earlier this week, researchers and activists say state lawmakers are likely to continue efforts to restrict access to abortion.

The Kansas vote was the first state-level test after the Supreme Court voted to overturn Roe v. Wade, leaving it up to states to regulate access to abortion. At least four other states will have abortion-related questions on the ballot this November, leaving voters to decide on access to abortion in some areas.

As of Thursday, ABC News reported that 59% of Kansas voters voted “No” to repealing the right to abortion access in the state’s constitution. Researchers told ABC News the margin by which the vote was won was surprising.

The vote came after the state’s Supreme Court decided in 2019 that the Kansas constitution establishes a fundamental right to abortion.

Not the end of the story in Kansas or elsewhere

Despite that ruling, a majority of lawmakers in the state Senate oppose abortion rights and have passed several laws that restrict access to abortion, which are being challenged in the courts, Elisabeth Smith, the director of state policy and advocacy at the Center for Reproductive Rights, told ABC News in an interview.

“We have seen lawmakers hostile to abortion rights in Kansas and other states, continuously enact unconstitutional abortion bans and restrictions,” Smith said.

She added, “It would not surprise me if anti-abortion legislators in Kansas continued to push the issue by passing unconstitutional bans that then the state has to pay to defend, by potentially continuing to attack the state Supreme Court or utilizing other tactics to try and enforce their — clearly unpopular — view.”

Elizabeth Nash, principal policy associate for state issues at the Guttmacher Institute, which researches reproductive rights, said this vote is not the end of the story.

“What we’d seen for the past decade are four other states that adopted similar measures — in Alabama, Louisiana, Tennessee and West Virginia — and all of them were approved by voters,” Nash said.

Nash said the margin with which the amendment was rejected was surprising because she said lawmakers had “stacked the deck” against the vote, putting it on a primary ballot and in somewhat confusing language. She said it is likely people started to get a better sense of the harm abortion bans can bring.

The Value Them Both coalition that supported the amendment blamed the results of the vote on “misinformation from radical left organizations.” The group vowed in their statement: “We will be back.”

Despite the vote, Kansas already has a number of restrictions in place with abortions currently banned after 22 weeks. According to Guttmacher, restrictions in place in Kansas include patients having to wait 24 hours after counseling before they can receive abortion, state Medicaid coverage of abortion care is banned except in very limited circumstances, and medication abortions must be given in person because of state bans on telehealth and mailing pills.

What does this vote mean for other states?

There is also an effort in Michigan to get a proactive constitutional amendment protecting abortion on the ballot. Michigan Gov. Gretchen Whitmer has filed a lawsuit blocking a 1931 abortion ban already on the books, asking a court to determine whether it is constitutional. A judge granted a temporary pause on enforcement of the law after state prosecutors had said they plan to use it to to bring charges against abortion providers.

While every state is different, Smith said it is very likely that other states that put abortion to a vote could have a similar result to Kansas, but it is unlikely more states will put abortion on the ballot this year. Nash also said elections will be key on abortion issues for years to come.

Kimberly McGuire, the executive director of pro-abortion rights group Unite for Reproductive and Gender Equity, which was on the executive committee for the campaign to vote no on the Kansas measure, hailed the vote as a victory.

“This is a taste of what is to come. People across the country, in particular young people, are angry about the attacks on abortion rights, they’re angry about abortion bans, and they are fired up,” McGuire said.

McGuire said the results of the Kansas vote are in line with the popularity of abortion rights among Americans.

An ABC News poll released in May showed that 57% of Americans oppose a ban on abortions after 15 weeks and 58% say abortion should be legal in all or most cases.

Nash said a lot of political back and forth can be expected as abortion policy continues to be “in flux” across the country.

“Most of the states touching Kansas are states that either have implemented abortion bans or are seeking to implement abortion bans. And so it’s really Colorado to the west that will maintain abortion access,” Nash said.

Nash said there is limited access to abortion in the western half of Kansas as well, so maintaining the limited access in the state is “incredibly important.”

She described abortion access in the region as “absolutely bleak.”

“Oklahoma, Arkansas, and Missouri, have total criminal abortion bans in effect right now, and other surrounding states are moving in that direction,” Nash said. “So Kansas has always been and will continue to be an incredibly important access point for abortion care.”