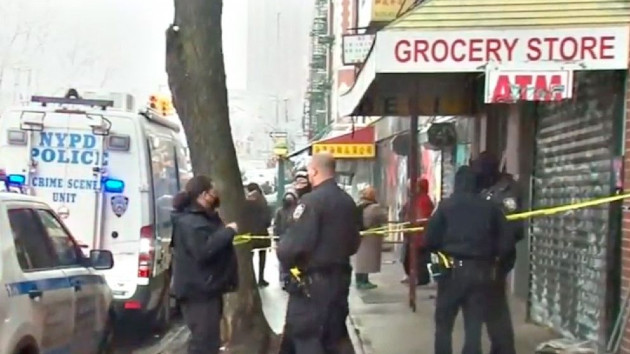 (NEW YORK) — A 35-year-old woman was stabbed to death in her downtown Manhattan, New York apartment in what appeared to be a random attack.

Christina Lee got out of a cab at about 4:23 a.m. Sunday and was followed into her Chinatown apartment building, according to New York City police.

When officers responded to a 911 call, they were confronted by someone barricaded inside the apartment, police said.

Once officers were able to breach the apartment, they found Lee stabbed in her bathroom, police said. She was pronounced dead at the scene.

The 25-year-old suspect, who police believe is homeless, was taken into custody as he allegedly tried to flee the scene, authorities said. The attack appeared to be random.

New York City Mayor Eric Adams said in a statement, “I and New Yorkers across the city mourn for the innocent woman murdered in her home last night in Chinatown and stand with our Asian brothers and sisters today.”

“The NYPD is investigating this horrific incident, and I thank them for apprehending the suspect,” Adams said. “While the suspect who committed this heinous act is now in custody, the conditions that created him remain. The mission of this administration is clear: We won’t let this violence go unchecked.”

Man who threatened NYC synagogue had gun and hunting knife, was not ‘idle threat’: Mayor