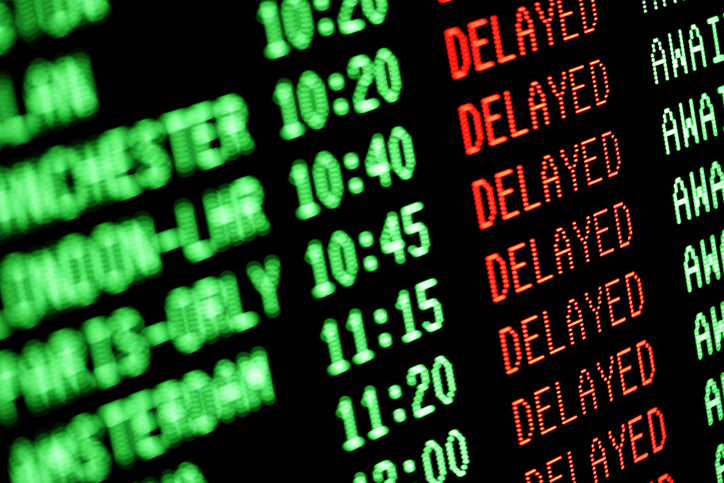 (NEW YORK) — Rebeca Andrade had been waiting days for a shipment of COVID-19 rapid tests to help keep her school open. The superintendent of a school in Salinas, California, Andrade said she wanted to be testing kids once a week to slow the spread of the omicron variant and protect the community.

But even as rapid testing to keep schools open was being pushed at the highest levels of government, Andrade was coming up short.

That’s because 350 miles away, some 17 million tests — including some earmarked by the California Department of Public Health for schools like Andrade’s, plus nursing homes, homeless shelters and childcare centers — sat backlogged on giant pallets for days.

Like so many other vital goods, precious at-home rapid tests have been caught in the supply-chain snare, caused by a combination of workers calling out sick with omicron and bottlenecked warehouses that are already operating over capacity to handle the massive demand for tests.

The impacted tests are some of the test kits produced by iHealth, which are manufactured in China and have been purchased by at least 15 states.

“The delays that we’ve experienced during this time, I know that sometimes it’s out of our control, but this is something that I would say is really critical and a priority for us to continue to offer in-person learning for each and every one of our students,” Andrade told ABC News.

As of Thursday, the distribution company that handles the iHealth shipments from China, XChange Logistics, had worked through the millions of backlogged tests, only to face delays on three of iHealth’s charter planes carrying roughly 25 million tests, the company told ABC News.

At the same time, the distribution company said it’s still sending out 20 truckloads of tests per day from its Los Angeles warehouse, which is the biggest distributor of iHealth tests.

For iHealth, which received authorization for its at-home rapid tests from the Food and Drug Administration in December and can manufacture up to 200 million tests per month, producing the tests has turned out to be the easy part.

Getting them to customers is the challenge.

“I hope that one day the American people can get the test the same day,” said iHealth COO Jack Feng, referring to the timeline of shipment from China and delivery in the U.S.

XChange Logistics said their warehouses were struggling at 200-300% over capacity last week.

And the stress of moving so many goods has been compounded by workers testing positive for COVID-19 — which usually means that an additional 8-10 workers have to quarantine due to exposure, said Frank Filimaua, the company’s general manager.

Over the past month, up to 30% of XChange Logistics’ workforce has been out with COVID-19, Filimaua said.

“That certainly is impacting the lack of manpower and the shortage of the ground-handling agents,” he said.

Under normal circumstances, without worker shortages and such a high-demand product, it would take 24-48 hours to get the tests from the planes onto trucks and on their way to customers.

But it was instead taking an average of five days, said Filimaua.

He estimated that it would take the company two more weeks to get back up to speed.

The supply chain backlog is the “biggest key factor as to why there’s challenges in getting these kits to schools, to medical offices, hospitals, and to consumers,” he said.

“Everybody has just been highlighting and showcasing the congestion at the ports and the container congestion,” said Filimaua. “Nobody’s really focusing on what’s happening at the international airports. It’s the same effect, but I would even say to a higher degree of challenges and impact to the supply chain and to the consumers.”

After ABC News reached out this week to the White House about the millions of backlogged tests, iHealth said the Biden administration had stepped up its efforts to help the company, which has now also contracted with the government to supply 250 million tests to Biden’s efforts to give out 1 billion free tests to the public, Feng said.

Agencies like Health and Human Services and the Department of Defense have begun to help iHealth get its tests through customs faster using priority labels, and will help charter flights full of the tests from China beginning in the first week of February, Feng said.

“They are helping us a lot,” said Feng.

Feng also said some states have also mobilized resources by sending ground teams to the warehouses to help move tests.

A Biden administration official told ABC News that the White House “continues to actively engage with manufacturers and distributors to help them expedite their timelines and help get tests to the American people.”

The official said the government was coordinating chartered aircraft for the 250 million iHealth rapid tests it had contracted for Biden’s plan, and was also working on “breaking through bottlenecks” at Los Angeles International Airport, where most shipments from China arrive, by working with the airport and with Customs and Border Protection to get each shipment “trucked out of the airport as soon as it lands.”

The official also noted that the Biden administration had increased the monthly supply of overall at-home rapid tests in the U.S. four times over from fall through December.

Experts note that the supply chain issues facing iHealth are not unique to that testing company.

Some of the issues stem from “general supply challenges,” said Mara Aspinall, head of the National Testing Action Program at the Rockefeller Foundation, which connects testing companies with state governments.

“But increasingly we’re hearing that — like all other essential businesses — manufacturers, shipping companies and others have so many people out with COVID that they can’t fully take advantage of the technological capacity, and therefore supplies are being slowed,” she said.

While iHealth is one of the most prolific producers of rapid tests for the U.S., other companies are also critical to meeting the enormous demand. ABC News reached out to several other large suppliers of rapid tests, including Roche, Siemens, Abbott and Ellume, and those that responded said they were doing everything possible to meet demand, including opening new production lines to scale up production by tens of millions of tests per month.

“There are currently tens of millions of tests in various settings and supply chains,” said Abbott spokesperson John Koval. “We build BinaxNOW in the U.S. because it hedges against unpredictable supply chains and is what enables us to produce at massive and reliable scale, which is what we’re doing.” As a result, Koval said, the company is aiming to be able to produce 100 million tests per month.

With more and more rapid testing products on the market, there’s also more competition for distributors. That’s been a particular challenge for iHealth, a new company that didn’t have the connections of bigger pharmaceutical companies that had been around for years.

“I think it’s hard to guarantee a consistent freight supplier for so many of these companies, because there’s not a program where when you receive an EUA [emergency use authorization from the FDA], you receive immediate distribution assistance,” said Andrew Sweet, managing director of COVID-19 Response and Recovery at the Rockefeller Foundation.

“That’s in part why we’re at where we’re at,” said Sweet. “It is really dependent on the individual manufacturer to have those relationships in order to get their product to market as quickly as possible.” As a result, said Sweet, the companies that have existing relationships can “hustle.”

“They’re more successful than others,” he said.