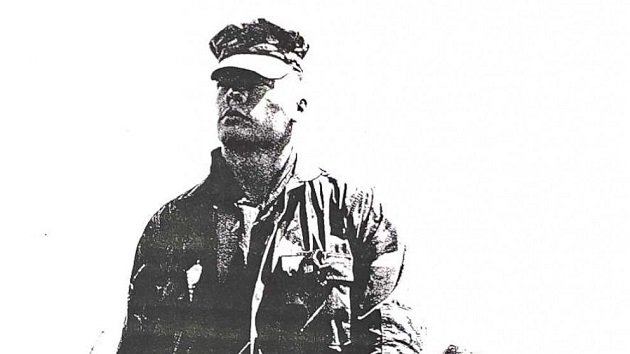 Courtesy of Ron Self

After close to a decade serving in the Marine Corps, Ron Self could knot a rope that was strong enough to drag military vehicles across combat zones in Africa. But serving time in a prison cell years later, he couldn’t get the bedsheets he’d tied together to hold.

“When I attempted to hang myself and the rope broke and I was on my knees and I realized immediately this is not — this was not — the solution,” he told ABC News.

After more than a decade of incarceration for a freeway shooting, Self said he was still processing the anger and shame of his arrest.

He is not alone: One-third of veterans say they have been arrested, according to a new report by the Council on Criminal Justice, citing a 2017 study focused on military service and crime.

“When you separate and you’re no longer part of something that’s bigger than anything you’ve ever been a part of your entire life — which is military service — and you don’t have that camaraderie anymore, it can take a, definitely, a dark turn,” Self said.

That’s what happened to him, he said: Self was a decorated Marine, awarded for his bravery in a helicopter crash in South Korea, by the time he was being medically discharged in the ’90s. But, he said, he felt increasingly unstable and estranged from civilian life. Which he thinks is why, in part, he agreed to be a hired gun and attempt to take someone’s life during their commute to work.

“I was laying in the back of a truck in a sniper hole built into this truck,” Self remembers of the 1994 incident, in which he armed himself on the freeway with a sniper rifle. “I was looking at him [the victim] through the crosshairs of the telescope on the rifle and I remember thinking how easy that would be, to just do that, and then take the off-ramp and go.”

Instead, Self said he aimed for the lower-right corner of the car windshield and shot two rounds, several seconds apart, in what he says was an attempt to avoid taking the man’s life.

“My intent was to make it public so that [the person who wanted him killed] couldn’t do it with someone else when this failed,” Self said.

He can still remember the reaction of a woman in a nearby car.

“The terror on her face from that windshield exploding and the gunshots — that terror is something I’ve only ever seen in combat,” he said. “The difference was we were there to stop the people causing it, and in that moment, it was me … I can’t even articulate how that hit me psychologically.”

The driver behind the shot-through windshield was injured but alive. Self was later arrested on charges of conspiracy to commit murder, attempted murder and firing a weapon within city limits.

“The fact that I did what I did, I think at a subconscious level, was me removing myself from society because I felt I didn’t belong in society,” he said.

Self was convicted and initially sentenced to 32 years to life in prison, with the possibility of parole.

After attempting to kill himself while incarcerated, he decided that he couldn’t let other former service members experience the same anguish.

“The solution would be a program that would help other veterans not make the poor choices I did,” he said.

While in prison, Self created a peer-to-peer mentor program, Veterans Healing Veterans from the Inside Out, to support other former service members navigating incarceration, past trauma and suicidal ideation.

He was later able to successfully argue in a parole hearing that he was attempting to avoid taking anyone’s life on the freeway and was released from prison in 2017 after serving 23 years.

The former Marine recently joined the Council on Criminal Justice as an inaugural member of the Veterans Justice Commission, which launched last month.

He believes the council provides “a strength, a position, a structure that we can work within and we can work on to attract some of the best minds in the country on this issue.”

“We need to do a better job,” he said of society supporting veterans returning from war. “And it’s not good enough to just say, well, we can do more. With this commission, hopefully what we can do is we can be specific.”

The commission recognizes more than 181,500 veterans in prison or jails across the U.S., citing the latest count estimated in 2011-2012 by the Department of Justice. According to the same data, 8% of people incarcerated in local jails and state and federal prisons in the U.S. are veterans.

The majority of incarcerated veterans are sentenced for violent crimes and close to twice as many veterans are serving life sentences than their non-veterans counterparts, according to the commission’s report, citing a 2016 survey by the DOJ.

Federal, state and local programs have been established to assist incarcerated veterans. The Veterans Justice Outreach Program was launched in 2009 by the Department of Veterans Affairs to better identify incarcerated veterans and connect them to appropriate resources. While the U.S. House Committee on Veterans’ Affairs references 138,000 veterans served by this program over a four-year period, the commission also acknowledges a pervasive lack of awareness from service members of what support systems are available to them both before and after their arrests.

When Self was being processed through his medical discharge after his military service, he said he was not made aware of all of the resources available to him.

“I had no clue that I had a potentiality for service-connected benefits or actual monetary benefit,” he said. “I had no idea about any of that.”

“I don’t want to blame the military,” Self continued. “And I’m not. And I’m not playing the victim. I own a very poor decision I made. But I also take into consideration now — I made this decision five months after several people I served with were killed, and I never processed that.”

After years in the military, the Marine Corps had become his family, where he said he found “people that have basically chewed the same dirt, spit the same bud.”

The chronic pain he faced that caused his eventual medical discharge from the Marines, he says now, was more tolerable overseas because of his relationships with his fellow service members. “To be removed from that — it was an absolute loss of identity.”

“It’s an inappropriate cry for help,” Self said of service members committing crimes.

He recognizes his unique position as a formerly incarcerated veteran on the commission to answer those cries.

“Everyone that raised their hand to serve was trusted to carry a weapon in defense of this country. I violated that trust by doing what I did,” he said of his shooting. “I may not ever be able to regain that level of trust. I can definitely spend the rest of my life trying to.”

Self believes the commission will be an important next step in studying the larger issue and ensuring incarcerated veterans know they are not alone or beyond correction and rehabilitation.

“We all have the ability for redemption. We all have the ability to change how we frame and view our past,” Self said of fellow service members who may have found themselves in a similar position to him. “If we can reframe how that drives us through the rest of our lives, it could be a lot more helpful to all people leaving the military and the society in which we fought for.”