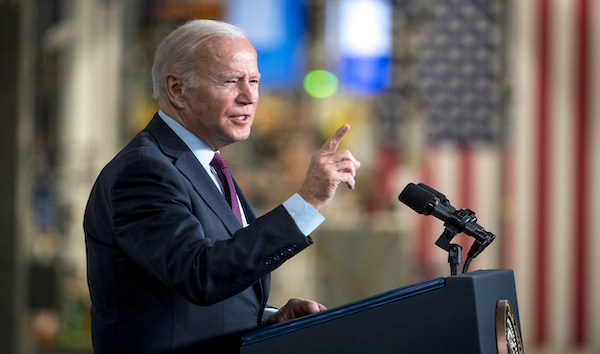 (WASHINGTON) — Reeling from Republican wins in elections earlier this month, Democrats are pounding the pavement ahead of next year’s midterm elections.

But President Joe Biden’s success passing the bipartisan infrastructure bill is bumping up against the facts that the country’s inflation rate has reached a 30-year high and Americans increasingly feel the economy is in trouble.

A new ABC News / Washington Post poll found that 70% say the economy is in bad shape, a 12-point increase since last spring. More than half of those polled — 55% — disapprove of Biden’s handling of the economy while 39% say they approve. But that approval number has plummeted six points since September and 13 points since the spring.

While only 50% blame Biden directly for inflation — which has now reached a 6.2% increase compared with the same period last year, 3% of Democrats say the economy is excellent, 47% say it’s good, 35% say it’s not so good and 14% say it’s poor.

In a series of ABC News follow-up interviews with poll respondents who were Biden voters but expressed disappointment with the state of the economy, people expressed a range of views about what they think went wrong and who is to blame.

Judith Steele, a registered Democrat from California, told ABC News she feels the Biden administration did a bad job in preparing for economic woes faced by certain Americans.

“His administration has been behind the curve in anticipating how bad this was going to get for lower- and middle-class families — that they tend to take a ‘wait and see approach,’ or, ‘this is going to pass,’ and then it’s too late,” Steele, who plans to switch her party affiliation from Democrat to Independent, said in an interview.

Steele assigns some of the blame for the poorly-performing economy to legislative squabbles in Congress.

“They should have gotten the infrastructure bill done months ago. They had the votes to do it. But they had to push. I do like the second bill, but they should have gotten the first one passed and signed, and started putting people back to work at decent union jobs,” she said. “I don’t know what they’re ever going to get done with this. And they’re always consumed with investigations and committee work and not getting anything done.”

Although Biden’s overall approval rating reached a new low (41%) in a new ABC/ Washington Post poll, his legislative plans have majority approval among respondents, with 63% support for the $1 trillion infrastructure bill passed by Congress and 58% support for the now nearly $2 trillion social spending bill still under debate.

The White House is set to launch a nationwide tour to continue pitching Biden’s plans to voters and Democrats are rolling out 1,000 events before the end of the year to promote the Biden agenda.

Still, disapproval of Biden on the economy is six points higher than former President Donald Trump’s highest disapproval rating on the same issue, which came in September 2017, nearly the same amount of time into his presidency as Biden is now. In November 2018, Republicans relinquished control of the House, with 68% of the country overall saying in exit polls they felt the economy was in good shape.

Steele isn’t the only Democrat who supported Biden but doesn’t feel good about the economy. Norman Hall, an 82-year-old Pennsylvania voter who has been a Democrat since he was 21, is trying to stretch his social security checks and doesn’t think Biden is doing enough to address the issue.

“All them prices went up, my check disappeared real quick, my social security check. It’s usually around hundred-and-some dollars a month when I buy groceries. It was $217 for almost the same thing I buy all the time,” said Hall, who voted for Biden last year. “I have to cut down. I have to quit spending.”

“I don’t know who’s to blame for it, but he’s not doing anything to help it,” he added of Biden.

Hall said he plans to vote for Republicans on his midterm ballot unless he sees Democrats “do things differently.”

The ABC News / Washington Post poll found that if the midterm elections were held today, 51% of registered voters say they’d support the Republican candidate in their congressional district, 41% say the Democrat. That’s the biggest lead for Republicans in the 110 ABC/Post polls that have asked this question since November 1981.

Tiffany Woods, a community health care worker from St. Louis, told ABC News she typically votes for Democrats and was excited to cast her ballot for Biden and Vice President Kamala Harris. Since then, though, Cross said she hasn’t been impressed with Biden’s accomplishments in Congress and is seeing the economic effects of the pandemic continue to take a toll in her community.

Woods pointed to heightened utilization of her local food banks as her friends and family struggle to make ends meet with inflation and unchanged qualifications for government assistance programs.

“While these qualifications are not changing, the price of products are going up, and people can’t afford it,” she said. “People are depending a lot more on our food banks now. Now they need it for themselves.”

Woods lives in progressive Democrat Rep. Cori Bush’s Missouri district. She said if Biden and Harris are on the ticket again in 2024, she doesn’t think she’ll cast a ballot for them, but she does plan to vote next year for Bush, who fought into the summer to extend eviction moratoriums put in place due to the pandemic.

“I really do think that I will continue to vote Democrat because of people like her, who I do think are doing a wonderful job. I just don’t think that I would just vote for Biden, Kamala,” she said.

Margaret Johnson, a retiree in Georgia, was a lifelong Republican before Trump entered the party. She broke her dedication to the GOP in 2020 — casting ballots for Biden and both Democratic Sens. Jon Ossoff and Raphael Warnock — but she regrets her decision.

“I went against my Republican instincts and voted for Biden, which I’m very sorry with. If I had to do it over again. I wouldn’t vote for either one of them. I would have just stayed out of it,” she said. “Everybody I know is having to pinch pennies. To me, more and more people are using less and less … But it’s not just groceries. It’s everything.”

Johnson said that despite her discontent with the GOP, she doesn’t think she’ll cast a ballot for a Democrat again, including for Warnock when he is up for reelection next year.