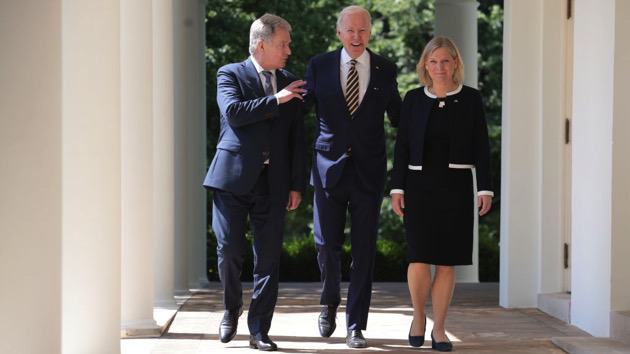 All three leaders called for swift acceptance of the applications amid resistance from Turkey’s President Recep Tayyip Erdogan, who announced Thursday that his country will oppose Finland and Sweden joining the alliance.

“The bottom line is simple, quite straightforward,” Biden said in remarks made from the Rose Garden. “Finland and Sweden make NATO stronger, not just because of their capacity, but because of their strong democracies and a strong united NATO is the foundation of America’s security.”

The two nations formally submitted their applications on Wednesday as Russia’s invasion of Ukraine is about to enter its fourth month, making the decision after seeing strong support from the public and the backing from their respective governments. Biden said conversations between the U.S., Finland and Sweden about Russia’s aggression in Eastern Europe and NATO accession been going on for months, and that they have the “complete backing” of his administration. On Thursday, his administration will submit reports on accession to Congress so lawmakers can move “efficiently and quickly” on consenting to the expansion.

Biden also appeared to have a message Thursday for Russian President Vladimir Putin, a staunch opponent of NATO expansion.

“Let me be clear: New members joining NATO is not a threat to any nation,” Biden said. “It never has been. NATO’s purpose is to defend against aggression, that’s its purpose, to defend.”

Finland and Sweden’s move to join the alliance is also welcomed by NATO Secretary-General Jens Stoltenberg, who said Wednesday the nations are their “closest partners.”

“All allies agree on the importance of NATO enlargement,” Stoltenberg said at a news conference. “We all agree that we must stand together. And we all agree that this is an historic moment, which we must seize.”

The request must be approved by all of NATO’s 30 member countries, making Erdogan’s objection a potential headache.

“We have told our relevant friends we would say ‘no’ to Finland and Sweden’s entry into NATO, and we will continue on our path like this,” Erdogan said in a video statement on Thursday.

Erdogan has been critical of both countries, stating he perceives them as being supportive of groups Turkey views as extremist — including the banned Kurdistan Workers’ Party, or PKK.

Both Sweden’s prime minister and Finland’s president addressed Turkey’s disapproval during their visit to the White House.

“Finland has always had proud and good bilateral relations to Turkey,” Niinistö said. “As NATO allies, we will commit to Turkey’s security, just as Turkey will commit to our security. We take terrorism seriously, we condemn terrorism in all its forms and we are actively engaged in combating it. We are open to discussing all the concerns Turkey may have concerning our membership in an open and constructive manner.”

Andersson said Sweden is having dialogues with all NATO members, Turkey included, to sort out any issues at hand.

Despite Turkey’s opposition, White House national security adviser Jake Sullivan told ABC White House Correspondent MaryAlice Parks on Wednesday the administration is “confident at the end of the day” that Finland and Sweden “will have an effective and efficient accession process” and that “Turkey’s concerns can be addressed.”

Secretary of State Antony Blinken and Turkish Foreign Minister Mevlüt Çavuşoğlu met in New York on Wednesday to “reaffirm their strong cooperation as partners and NATO allies,” according to a joint statement.

“They discussed ways and assessed concrete steps to enhance their cooperation on defense issues, counterterrorism, energy and food security, combatting climate change and boosting trade ties, while agreeing to intensify consultations on a range of regional issues,” the statement read.

Biden heads to Europe amid domestic turmoil over abortion, guns