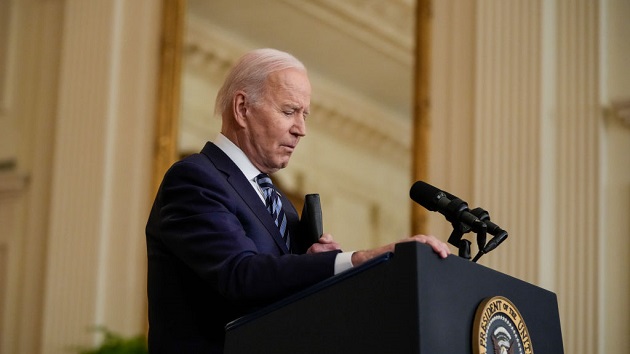 (WASHINGTON) — President Joe Biden called a desperate but defiant President Volodymyr Zelenskyy on Friday as Russian forces closed in on Ukraine’s capital Kyiv and after he publicly pleaded with U.S. and European nations to do more to help.

Zelenskyy also called on Russian President Vladimir Putin to negotiate, but Putin showed no interest in a diplomatic solution.

He appeared, instead, to call for a coup in Ukraine in a statement Friday, calling on Ukraine’s military to turn on Zelenskyy, who was elected democratically, and terming his government a “gang of drug addicts and neo-Nazis that has settled in Kyiv and taken hostage the entire Ukrainian people.”

In an address to his people Friday morning, Zelenskyy called on Putin “to sit at the table for negotiations to stop people dying,” but did not order Ukrainian troops to stop fighting, telling them to “stand tough. You’re everything we have, you’re everything that is defending us.”

Russia’s Foreign Minister Sergey Lavrov said Friday that Russia will begin negotiations again once the “democratic order is restored” in Ukraine, suggesting that only once it has forced Ukraine’s government to surrender and conceded to demands, will it negotiate, with the Kremlin claiming Zelenskyy wants to discuss Ukraine’s “neutrality.”

Russia had demanded Ukraine agree to never join NATO before Putin invaded, which Zelenskyy would not agree to, though Zelenskyy wasn’t seemingly close called to NATO membership, at one point calling it a “dream” for Ukraine.

On Russia’s demand that Ukraine be barred from joining NATO, White House press secretary Jen Psaki has said repeatedly that “that is a decision for NATO to make.”

As Russian troops got ever closer to the capital, the Ukrainian president reportedly told European leaders in a call Thursday night, “This may be the last time you see me alive.”

“We have information the enemy as defined me as number one target and my family as a number two target,” he said in a video address to the nation Friday. “They want to destroy Ukraine politically by destroying the head of state.”

“I will stay in the capital,” Zelenskyy added. “My family is also in Ukraine.”

Even as Zelenskyy pleaded with Western allies to do more to help Ukraine defend itself against Russia’s attack, now in its second day, Biden has emphasized that sanctions on Russia will take time to have an impact, but he faced continuing questions as to why not sanction the Russian leader now.

Thousands of Ukrainians forced to flee their homes appear to be running out of time as Russian forces advance on the capital city Kyiv, and U.S. officials express concerns that Kyiv could fall to Russia within days.

Zelenskyy had urged allies including the U.S. to enact sanctions before Russia invaded, lamenting last week that the “system is slow and failing us time and again, because of arrogance and irresponsibility of countries on a global level” — but that, largely, did not happen.

The Biden administration, at first, said that its sanctions were meant to deter war, and once triggered, the deterrent effect would be lost — but under questioning from ABC News Chief White House Correspondent Cecilia Vega Thursday, who noted that “sanctions clearly have not been enough to deter Vladimir Putin to this point,” Biden replied, “No one expected the sanctions to prevent anything from happening.”

However, Vice President Kamala Harris said on CBS Sunday that “the purpose of the sanctions has always been and continues to be deterrence,” echoing language from Secretary of State Antony Blinken, national security adviser Jake Sullivan and several other administration officials over several weeks — in sharp contrast to Biden’s claim.

The White House official in charge of crafting the sanctions against Russia, Daleep Singh, playing a kind of clean-up Thursday evening, said that the sanctions were never meant to deter war and laid out multiple reasons why the administration didn’t move preemptively.

“Had we unleashed our entire package of financial sanctions preemptively,” he said, “President Putin might have said, ‘Look, these people are not serious about diplomacy, they’re not engaging in a good faith effort to promote peace. Instead, they’re escalating.’ And that could provide a justification for him to escalate and invade.”

“Secondly, he could look at it as a sum cost. In other words, President Putin could think I’ve already paid the price, why don’t I take what I paid for, which is Ukraine’s freedom. So that’s what we wanted to avoid,” Singh added.

But even Democratic lawmakers are calling on Biden to do more to sanction Russia.

“There is more that we can and should do,” said Sen. Bob Menendez, the top Democrat on the Senate Foreign Relations Committee. “Congress and the Biden administration must not shy away from any options—including sanctioning the Russian Central Bank, removing Russian banks from the SWIFT [international banking] system, crippling Russia’s key industries, sanctioning Putin personally, and taking all steps to deprive Putin and his inner circle of their assets.”

Even if Biden did sanction Putin as he’s said is “on the table,” there are still major questions about what more the U.S. and Europe can do to not only punish Russia and Putin, but whether any of the sanctions can change his calculus — or make him retreat from the ongoing invasion of Ukraine.