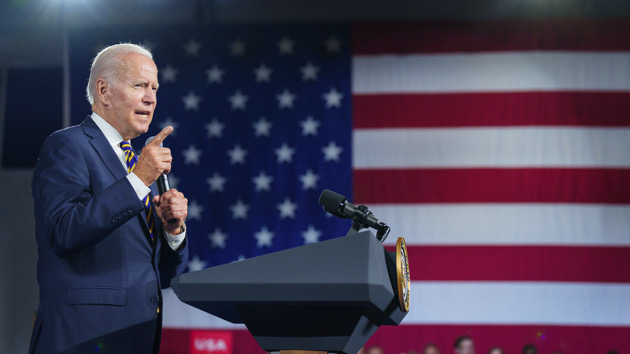 But now, bolstered by stronger poll numbers and relatively positive economic news, Biden as of late has been seeking to make the midterm elections a referendum on the former president — and the extreme ideas he says Trump’s supporters espouse.

“There’s no question that the Republican Party today is dominated, driven, and intimidated by Donald Trump and the ‘MAGA Republicans,’ and that is a threat to this country,” Biden said Thursday during a prime-time speech at Independence Hall in Philadelphia.

His remarks represented the culmination of weeks of ramped-up rhetorical attacks on not all Republicans but Trump-loyal Republicans, whom he has blasted as “ultra-MAGA Republicans” and “MAGA extremists.”

Last week, he said “the entire philosophy that underpins” the GOP was akin to “semi-fascism.”

Biden has increasingly sought to portray Americans’ choice this November as one between light and darkness — with Trump and his supporters representing “an extremism that threatens the very foundations of our republic,” as he said Thursday.

And he has been helped by Trump, whose actions have put him in a less-than-positive light.

Since the FBI executed a search warrant at his Mar-a-Lago estate, Trump has publicly fought back — even making the raid public in the first place. His haphazard approach has led to sensational headlines as the Justice Department pushes back on his claims.

By holding onto hundreds of documents — many allegedly classified — in the first place, the former president has left Republican candidates who want to look tough on crime struggling to answer for those in their party publicly attacking the FBI, all while U.S. intelligence agencies are assessing the fallout.

“I think that Trump is making this a referendum on himself by the way he’s behaving, and it’s causing a lot of problems for other Republicans,” James Thurber, a professor of government emeritus and author who founded American University’s Center for Congressional and Presidential Studies, told ABC News. “He’s the story, rather than inflation and other issues they’re accusing the Democrats of failing on.”

Historically, midterm elections have served as a referendum on the current president. And this year’s did not look good for Biden, who faced sagging poll numbers, roadblocks on Capitol Hill and Democratic candidates who signaled they did not want him to join them on the campaign trail.

But in just a few months, he’s notched up a string of legislative victories: a historic climate, health and tax package; a gun reform law; hundreds of billions to boost the domestic semiconductor industry; and new protections for veterans. Last year’s $1.9 trillion bipartisan infrastructure law, whose results are now starting to materialize.

By overturning Roe v. Wade and taking away the constitutional right to an abortion, the Supreme Court has energized voters — with signs Democrats could benefit this fall.

Last week, a Democrat who declared “choice is on the ballot” won a special congressional election in upstate New York, and last month, voters in traditionally conservative Kansas voted to protect abortion rights.

Biden has benefited from his own rapidly rising poll numbers, after suffering record-low approval ratings earlier this year. In a Quinnipiac University survey conducted Aug. 25-29, 40% of Americans said they approved of the job Biden was doing, up 9% from the month before.

At the same time, Americans are acutely aware of developments surrounding Trump — and most view them in a negative light.

In that same poll, 76% of Americans said they had been following the news about the Mar-a-Lago seizure. Fifty-nine percent said they think Trump acted inappropriately, and 50% said they thought he should be prosecuted on criminal charges.

While Biden has repeatedly deferred questions about the investigation to the Justice Department, he has — by implication — made clear the choice he says voters have.

“In 2020, you and 81 million Americans voted to save our democracy,” he told thousands of supporters at a rally in Maryland last week. “That’s why Donald Trump isn’t just a former president, he is a defeated former president.

“It’s not hyperbole,” he continued. “Now you need to vote to literally save democracy again.”

Biden has also been buoyed by changing economic tides.

For much of his presidency, he has struggled to persuade Americans he had a handle on the economy, as prices for gas and other goods skyrocketed and inflation hit 40-year highs. Presidents historically foot the blame for high gas costs, even though they don’t have much control over them.

But now, prices at the pump have dropped 11 weeks in a row, and there are signs inflation is slowing.

Still, inflation could remain a weak point for Biden, who understands the economy is always a top issue for voters, according to Todd Belt, a professor and expert on the presidency at The George Washington University.

“Republicans wanted to run on inflation and crime,” Belt told ABC News. But Trump retaining government documents and Republicans’ attacks on the FBI have allowed Biden to take the side of law enforcement and look tougher on crime, he said.

“The question is, are there enough voters for whom other issues are more important, such as abortion, such as saving democracy, such as health-care benefits,” that Biden and the Democratic Party can push candidates past the finish line in enough Senate and House elections to retain power in either body, Belt said.

Democrats had long expected to lose control of both the Senate and House, but that dynamic is shifting.

Senate Minority Leader Mitch McConnell said last month that Republican “candidate quality” may hurt Republicans’ chances of flipping the Senate — after a handful of Trump-endorsed nominees have stumbled campaigning before the wider, general electorates in their states.

And while Republicans are still favored to gain control of the House, they may pick up fewer seats than originally expected.

Voting to save ‘the soul of the nation’

Making the November midterms a choice between those who want to save democracy — the “soul of the nation,” as Biden has put it — and those he says seek to destroy it fits a central theme Biden has returned to repeatedly for years.

His Philadelphia remarks harkened back to the moment he says he decided to run for president in 2017, when Trump defended white nationalists after violent clashes in Charlottesville, Virginia. Then, Biden declared, “We are living through a battle for the soul of this nation.”

“I ran for president because I believe we were in a battle for the soul of this nation,” he said Thursday. “I still believe that to be true.”

His Philadelphia remarks were deeply partisan in nature, but the White House had insisted the president was holding an “official,” as opposed to political, event, since most a majority of Americans agreed with its theme that “we need to save the core values of our country.”

Biden has shown a particular interest in Pennsylvania; his Thursday trip was the second of three planned in just one week.

His speech may not have reached as many voters’ eyeballs, though, with Penn State football kicking off its season at the same time.

And none of the three largest broadcast television networks aired the speech live nationally; while the networks often show more official addresses like those from the Oval Office, they typically eschew airing speeches that are more political in nature, like Biden’s.

In Pennsylvania, Democrats hope to pick up a Senate seat during a race between Pennsylvania Lt. Gov. John Fetterman, a Democrat, and Republican Mehmet Oz. The state has also hosted a hotly contested race for the governor’s mansion, with Trump-supporting Republican Doug Mastriano taking on Democrat Josh Shapiro, Pennsylvania’s attorney general.