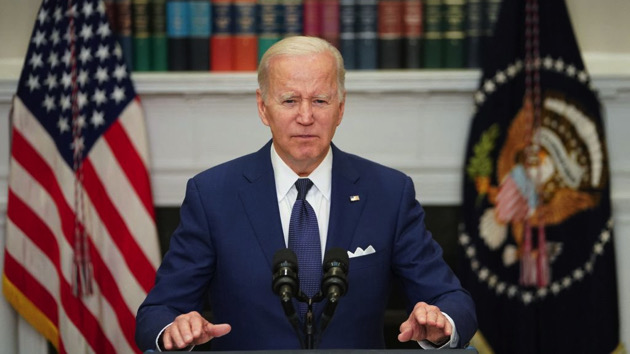 (WASHINGTON) — President Joe Biden will deliver prime-time remarks on Thursday evening “on the recent tragic mass shootings, and the need for Congress to act to pass commonsense laws to combat the epidemic of gun violence that is taking lives every day,” according to the White House.

Biden taking the national spotlight comes amid some criticism over his apparent lack of involvement with congressional lawmakers negotiating a package amid a national reckoning over gun violence.

The latest mass shooting on Wednesday in Tulsa, Oklahoma, leaving four dead, follows a massacre of 19 students and two teachers at an elementary school in Uvalde, Texas, as well as an apparently racially-motivated attack at a grocery store in Buffalo, New York, leaving 10 Black people dead.

Biden told reporters earlier this week he “will meet with the Congress on guns — I promise you,” but the White House has not provided details on when a meeting might take place.

After Biden said on Thursday he’s “not confident” Congress will be able to pass gun reform legislation, White House press secretary Karine Jean-Pierre, under questioning about the president’s involvement in the Hill negotiations, said that Biden understands that some negotiations require giving Congress “a little space.”

Biden claimed earlier this week to have visited more aftermaths of mass shooting than any other American president.