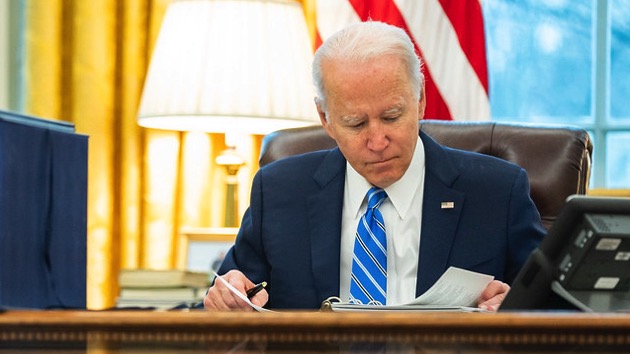 (WASHINGTON) — Speaking just hours after Ukrainian President Volodymyr Zelenskyy called on him to be a “leader for peace,” President Joe Biden on Wednesday began by thanking Zelenskyy for his “passionate message” and detailed how much military aid the U.S. is already providing — or will provide — to Ukraine.

Biden called the speech “convincing and significant” and said he listened from the White House private residence.

“He speaks for people who have shown remarkable courage and strength in the face of brutal aggression — courage and strength that’s inspired not only Ukrainians but the entire world,” Biden said. “Putin is inflicting appalling, appalling devastation and harm on Ukraine — bombing apartment buildings, maternity wards, hospitals. I mean, it’s — it’s God awful.”

He did not directly address Zelenskyy’s emotional and direct appeal to lawmakers on Wednesday for the U.S. to back a no-fly zone the administration has repeatedly rejected.

Biden went on to announce an additional $800 million in military assistance as part of the $13.6 billion aid package for Ukraine contained in the government spending bill Biden signed into law Tuesday, which includes weapons the Ukrainians have been requesting, such as anti-armor and anti-air systems.

But White House press secretary Jen Psaki reiterated Tuesday that the administration doesn’t support Zelenskyy’s no-fly zone request because the U.S. has to consider its own national security, and as Biden has repeatedly put it, does not want to enter “World War III.”

“We have the responsibility to do here is to assess what the impact is on the United States and our own national security,” she said.

While the U.S. has imposed a slate of economic and trade sanctions to isolate Putin, the Biden administration has also flatly rejected U.S. troops fighting Russian forces in Ukraine and any help delivering MiG-29 fighter jets that Poland wants to get to the Ukrainians.

Psaki also said Biden would watch Zelenskyy’s speech “to the degree” that his schedule allowed.

Earlier Wednesday, to a packed auditorium of lawmakers and standing ovations, Zelenskyy seized the spotlight to push Biden to contribute more lethal aid, lawmakers to sanction more companies with ties to Russia, and said if the U.S. cannot agree to support a no-fly zone, then to give Ukraine S-300 systems and other similar weapons to defend their skies.

While the White House event allows Biden to detail what the U.S. is doing in place of a no-fly zone, he will be forced to respond to Zelenskyy’s emotional appeal, in which he told Americans to remember Pearl Harbor and the 9/11 attacks when witnessing the terror in Ukraine and closed by calling out Biden by name, in English, to do more.

In remarks on the Senate floor following Zelenskyy’s address, Minority Leader Mitch McConnell criticized the Biden administration for what he’s characterized as a sluggish response to the crisis in Ukraine and outlined three steps the administration should take to pick up the pace.

McConnell called on Biden to expand the scope of U.S. lethal aid to Ukraine to include more effective long-range air defense capabilities, to deploy more U.S. forces to reinforce NATO’s eastern flank and use new authorities to harden the defenses of frontline allies, and finally, for Biden to go “beyond Brussels” on his trip next week and to visit Eastern flank, NATO allies like Poland, Romania and Lithuania.

“As the threat to Ukraine gathered whenever an opportunity to act has presented itself, the Biden administration has hesitated until the political pressure became overwhelming, or balked outright,” McConnell said.

Although he made no direct mention of a no-fly zone, McConnell hit hard on the need to help Ukraine shore up its air defense, arguing the administration should quickly get Ukraine air defense systems “that we should have helped Ukraine get weeks ago.”

Biden will travel to Brussels next Thursday to meet with NATO leaders in his first European visit since Russian President Vladimir Putin started invading Ukraine, the White House announced Tuesday, to meet “face-to-face” with his European counterparts to assess Russia’s invasion of Ukraine.