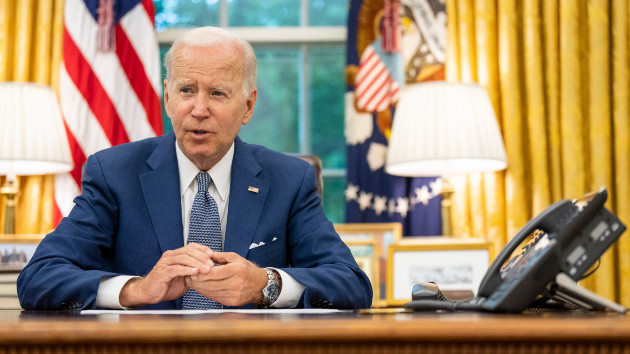 (WASHINGTON) — While Iran’s brutal attempts to put down nationwide protests — sparked by the death of a young woman in the custody of its so-called morality police — have done little to stop domestic dissent, the crackdown has dire implications for the regime on the international stage, cementing Iran’s pariah status.

Following Iranian security forces siege of an elite university in Tehran where students were demonstrating, President Joe Biden this week promised his administration would soon impose “further costs on perpetrators of violence against peaceful protestors.” Administration sources say those additional penalties could come as soon as Thursday and are expected to include sanctions targeting human rights violators in the country.

Meanwhile, the top levels of leadership within Iran have sought to blame outside influences for fueling the nearly three straight weeks of unrest. In his first public response to what he characterized as “riots,” Iran’s supreme leader, Ayatollah Ali Khamenei, baselessly claimed the protests had been orchestrated by the U.S. and Israel.

Will Iran’s attempts to blame the West work?

Behnam Ben Taleblu, a senior fellow at the Foundation for Defense of Democracies, said Khamenei’s attempt to point the finger at the West was “reliance on a decades-old authoritarian playbook,” predicting it would have little impact in the current political climate.

“There’s no doubt that Iranians don’t buy Khamenei’s attempts to deflect. That’s why they remain on the streets. Iranians understand who is responsible for their current predicament,” Taleblu said.

“I think the youth who are continuing to come to the streets and have organized protests at their schools and universities know better about who is posing a challenge to their lives,” said Gissou Nia, director of the Strategic Litigation Project at the Atlantic Council and board chair of the Iran Human Rights Documentation Center. “In previous protests, we saw slogans to the effect of ‘our enemy is not America, our enemy is right here."”

Iranian powers have also attempted to scapegoat entities closer to home. In recent days, the country’s Islamic Revolutionary Guard Corps (IRGC) has repeatedly struck at Kurdish groups across its border in Iraq, accusing them of inflaming protests.

Taleblu called the missile barrage “an attempt to feign strength abroad when weakness has been showcased at home,” and warned similar — and likely, more severe — attacks will follow if the regime doesn’t face broad consequences.

Despite longstanding U.S. disdain for Iran’s IRGC, its ballistics program, and its human rights abuses, the Biden administration has been engaged in a winding and indirect negotiation process with Tehran aimed at finding one area of common ground — a deal to limit its nuclear program.

Though talks have all but collapsed, U.S. officials initially expressed some hope that the unrest might encourage Iran to renew an Obama-era pact known as the Joint Comprehensive Plan of Action (JCPOA) to secure the sanctions relief that would come with it. But both Behnam and Nia argue that Iran’s crackdown should only darken the already grim outlook on returning to an agreement.

“I think it would be a very wrong moment for the international community to somehow shore up the Islamic Republic [of Iran] in this moment, when the people of Iran are clearly saying they don’t want this government, or that they want substantial change,” said Nia.

Taleblu argues that the Biden administration should shut down negotiations altogether.

“Tehran continues to have Washington right where it wants it on the JCPOA: constantly seeking a deal,” he said. “As long as Biden keeps the door open for the JCPOA, he will be unable to fully stand with the Iranian people.”

This week, Iran made a separate, surprising move that the regime argues should lead to a windfall: allowing Baquer Namazi, an 85-year-old Iranian American held captive in Iran since 2016 on dubious charges, to leave the country for urgent medical treatment and granting a temporary prison furlough to his son, Siamak Namazi — another American citizen considered to be wrongfully detained.

Tehran claimed the developments should prompt Washington to unfreeze $7 billion in Iranian assets being held in South Korea due to U.S. sanctions.

Although the elder Namazi left Iran on Wednesday, the U.S. is still working permanently to secure the freedom of the younger, as well as a number of other American citizens detained in Iran.

U.S. officials have repeatedly denied agreeing to allow any funds to be transferred back to Iran. Taleblu warns reversing course would be detrimental for both Americans and Iranians.

“If Washington intends to pay ransom for hostages with frozen funds, two things will be guaranteed: the apparatus of repression currently on display in Iran will receive a boon, and second, Iran will continue to take hostages,” he said.