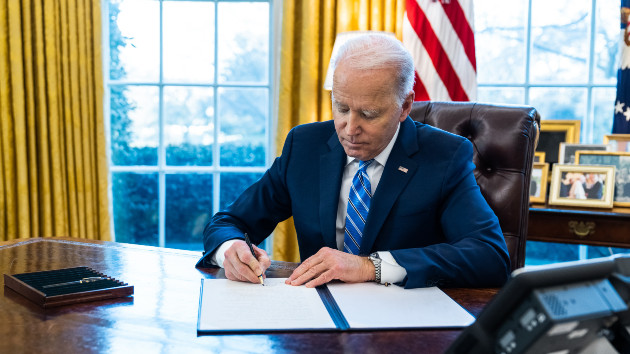 Drawing on the 2020 Robert Levinson Hostage Recovery and Hostage-Taking Accountability Act, the new executive order will reinforce the U.S. government’s efforts to support families of Americans wrongfully detained or held hostage overseas, according to the White House.

The order will authorize the federal government to impose financial sanctions on those who are involved — directly or indirectly — in wrongful detaining Americans abroad, the White House said. Moreover, government agencies will be directed to improve engagement with those Americans’ families, including sharing intelligence information about their loved ones and the government’s efforts to free them. The order will also charge experts across agencies with developing “options and strategies to deter future hostage-takings,” the White House said.

A senior Biden administration official told reporters that new sanctions will not be announced on Tuesday.

In addition to the executive order, Biden will introduce a new “risk indicator” — “the ‘D’ indicator” — to the U.S. Department of State’s travel advisories for particular countries to alert Americans of the risk of wrongful detention by a foreign government, according to the White House.

Starting Tuesday, the first countries to receive this additional risk indicator will be China, Iran, Myanmar, North Korea, Russia and Venezuela, another senior administration official told reporters. The “D” indicator joins the existing “K” indicator that covers the risk of kidnapping and hostage-taking by non-state actors, as well as a range of other existing risk indicators.

China’s “D” risk designation may spark ire in Beijing, where Chinese officials have largely tried to avoid the subject of wrongful detentions and where Western sanctions are a constant trigger.

Experts estimate that roughly 200 Americans are arbitrarily jailed in China, and that even more are subject to unlawful “exit bans,” barring them from leaving the country. Some advocates have pushed for the Biden administration to take a more vocal approach to secure their freedom, rather than the standard behind-the-scenes diplomacy. But the State Department has recently tried a similar strategy — updating their official advisory to American and instructing them to reconsider travel plans to China due to “arbitrary enforcement of local laws.”

Syria, with which the United States does not currently have formal diplomatic relations, will be notably excluded from the “D” risk designation on Tuesday. U.S. officials believe that while the Syrian government may not be currently holding American journalist Austin Tice in its custody, it could have valuable information on his whereabouts and perhaps those of other missing Americans. Tice, 40, was abducted in Syria nearly 10 years ago.

The White House recently held a telephone call for the relatives of detained Americans to share information with them about these new announcements. Some of them are in Washington, D.C., this week for the unveiling of a mural depicting their loved ones, according to a spokesperson for many of the families, Jonathan Franks.

Franks, who represents a group called the Bring Our Families Home Campaign, accused U.S. officials of holding a “one-way conversation with families” and ignoring their requests to meet with Biden.

The public mural in Washington’s Georgetown neighborhood will depict the faces of 18 American hostages and wrongful detainees, according to Franks. Among those featured will be American basketball star Brittney Griner, 31, and former U.S. Marine Paul Whelan, 52, both of whom remain detained in Russia, as well as U.S. permanent resident Paul Rusesabagina, 68, who inspired the acclaimed 2004 film Hotel Rwanda and was sentenced last September to 25 years in Rwandan prison over terrorism charges.

Franks accused the White House of rolling out these new steps in order to “pre-manage the press attention from many hostage families being in D.C. this week to unveil their mural,” saying “the White House is taking executive action to direct itself to follow existing law.”

The White House declined to comment in response to Franks.

According to the James W. Foley Legacy Foundation, there are actually 64 publicly known cases of Americans being held hostage or wrongfully detained around the world.