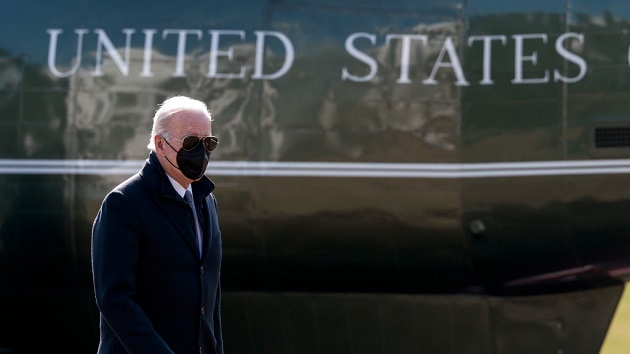 (WASHINGTON) — President Joe Biden’s first State of the Union address will be a remarkable scene: A maskless president speaking to more than 500 invited lawmakers packed cheek-to-jowl in the historic House chamber, also allowed to go without masks so long as they got tested first.

Case numbers and hospitalization levels have plummeted. Three-fourths of U.S. adults are now fully vaccinated with a growing number of people getting boosted. Rapid tests are finally widely available. And life-saving therapeutics including new anti-viral pills are growing in supply.

With such optimism on public display, Biden’s address will signal a new phase in the pandemic. It also will be a tacit acknowledgement that the virus, at any moment, could come roaring back to life.

Officials told ABC News that Biden on Tuesday would shy away from any suggestion of “mission accomplished” or even that the virus had morphed into an “endemic” state — a term reserved to describe a virus that persists but is mostly predictable.

Instead, a White House official described the president’s speech as noting the nation is now able to “move forward safely in a way in which COVID no longer disrupts our lives the way it has previously.”

The president also will “emphasize the need for the U.S. to remain vigilant in the face of an unpredictable virus, including by preparing for future variants,” said the official, speaking on condition of anonymity in order to discuss details in advance of the speech.

That the nation is “moving forward safely” probably isn’t the bumper sticker slogan Democrats were hoping for in a midterm election year. But it’s also a much more honest assessment of a virus that’s still widely circulating globally and which has killed at least 945,688 Americans despite aggressive efforts to contain its spread.

Biden’s speech will be in juxtaposition to last year’s Fourth of July speech in which he declared the nation was close to its “independence” from the virus. But pockets of the country refused to get vaccinated last summer, giving rise to fresh waves of COVID hospitalizations in the fall and winter, eventually shuttering classrooms and workplaces.

Accordingly, the White House has been revising its COVID strategy and meeting privately with some of the nation’s top pandemic experts to consider paths the virus might take. Instead of counting primarily on getting more Americans vaccinated and moving past the virus, Biden’s new strategy would acknowledge that Americans might experience COVID in waves in the year to come and that the federal government’s role would be to blunt its impact by shoring up supplies of booster shots, rapid tests and effective therapeutics.

Details of that strategy were expected as early as this week. Biden was expected to touch on that new strategy only broadly Tuesday night.

Also, last Friday, the Centers for Disease Control and Prevention announced new guidance for masks that factors in hospitalization capacity as much as it looks at new COVID case numbers and new COVID hospitalizations. The result is that based on current data more than 70% of Americans forgo masking indoors, including in schools, according to CDC guidance.

As if to remind the public of COVID’s reach, just hours before Biden’s speech Tuesday night, three Democrats — Reps. Jamie Raskin of Maryland, Alex Padilla of California and Suzan DelBene of Washington — announced they had tested positive. Several Republicans said they wouldn’t attend because they objected to having to take the PCR tests in the first place.

“We’ve seen things come down before only to be surprised,” one person said, describing the meetings as helping the administration to prepare for next steps.

Biden visits Puerto Rico after Fiona, commits to recovery ‘as long as it takes’