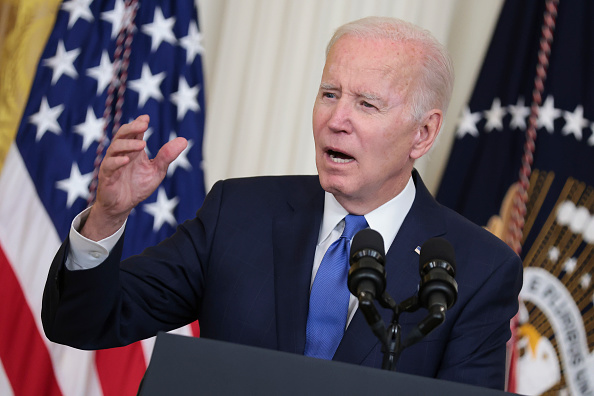 (WASHINGTON) — President Joe Biden, with less than a week to go until the midterms, delivered a speech Wednesday night condemning political violence and urging voters to protect democracy.

“We must with an overwhelming voice stand against political violence and voter intimidation, period,” he said. “Stand up and speak against it. We don’t settle our differences in America with a riot, a mob, or a bullet or a hammer. We settle them peacefully at the ballot box.”

Speaking from Union Station in Washington, a short distance from the U.S. Capitol, Biden began by addressing the attack against House Speaker Nancy Pelosi’s husband last week, detailing how an intruder broke into their California home and assaulted Paul Pelosi with a hammer.

“The assailant entered the home asking, ‘Where’s Nancy? Where’s Nancy?’ Those are the very same words used by the mob when they stormed the United States Capitol on Jan. 6, when they broke windows, kicked in the doors,” Biden said.

Biden then went on to denounce the Jan. 6 attackers as a mob “whipped into a frenzy” by former President Donald Trump’s lies about the 2020 election. Those falsehoods, Biden said, are still pervasive this election cycle with some Republican candidates espousing Trump’s lies about the 2020 race and are preemptively sowing doubt about the outcome in the races they’re running in this fall.

Biden also addressed vote tallies, trying to temper Election Day expectations by reminding the public that it may take a few days before full results are announced.

More than 28 million people have voted early in the 2022 general election, according to data analyzed by the University of Florida’s U.S. Elections Project.

“It takes time to count all legitimate ballots in a legal and orderly manner,” he said.

The speech came just six days out from the Nov. 8 elections, where Democrats are defending their slim majorities in Congress.

Forecasts from FiveThirtyEight point to a potential Republican takeover of the House, while the Senate is in flux.

Biden, Vice President Kamala Harris, former President Barack Obama and other political heavyweights have been hitting the campaign trial these final days to shore up voter enthusiasm in contentious races across the country.

Biden’s hoped to cast the 2022 cycle not as a referendum on his presidency but as a choice between Democrats and “MAGA Republicans” who he describes as extremists that threaten rights to abortion, privacy and same-sex marriage.

“I appeal to all Americans, regardless of party, to meet this moment of national and generational importance,” Biden said. “We must vote, knowing what’s at stake and not just the policy of the moment.”

But polling has shown kitchen-table issues are top of mind for a majority of voters. The latest survey from ABC News and Ipsos found 26% of Americans identify the economy as their single most important issue determining their vote while 23% cite inflation.

“People are worried about disorder. And whenever there’s disorder — in this case in crime and economic news — they tend to vote for the opposition,” Hank Sheinkopf, a longtime Democratic strategist, told ABC News.

Sheinkopf said it’s “hard to imagine” Biden’s message on democracy will move the needle before next week’s elections.

“[Biden] has to show that he is a unifier at a time of great division, but is it really going to move voters?” Sheinkopf questioned.