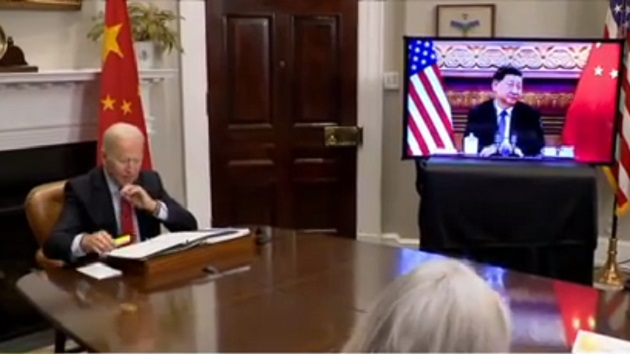 (DENPASAR, Indonesia) — President Joe Biden often describes his relationship with China’s President Xi Jinping in terms of miles — the thousands he says they traveled together when they were vice presidents.

But despite their personal history, the two have never met in person in their current roles. That will change Monday when they come together for a highly anticipated summit in Indonesia.

As they meet on the sidelines of the annual gathering of the Group of 20 leaders, this year held on the island of Bali, each man will have the wind at his back: Biden following Democrats’ surprising performance in the midterm elections, and Xi after securing a third term in office with the approval of the country’s Communist Party.

Biden told reporters Sunday that “I know I’m coming in stronger, but I don’t need that.” He cited his long relationship with Xi and noted, too, that Xi’s “circumstance has changed, to state the obvious, at home.”

“I’ve always had straightforward discussions with him,” Biden said during a visit to Phnom Penh, Cambodia. “There’s never any miscalculation about what each of us — where each of us stand. And I think that’s critically important in our relationship.”

“Having the two presidents actually be able to sit face-to-face, and not face-to-face with a video screen between them, for the first time in President Biden’s presidency — it just takes the conversation to a different level, strategically,” Biden’s top national security adviser, Jake Sullivan, said Friday.

On the agenda: Trade, Ukraine and more

Amid China’s military and economic rise, Biden and Xi are expected to discuss how to “responsibly manage competition, and work together where our interests align, especially on transnational challenges that affect the international community,” according to White House press secretary Karine Jean-Pierre.

“What I want to do with him, when we talk,” Biden told reporters Wednesday, “is lay out … what each of our red lines are, understand what he believes to be in the critical national interest of China, what I know to be the critical interest of the United States and determine whether or not they conflict with one another. And if they do, how do we resolve it and how to work it out.”

Economic competition is a key component of that. China has taken issue with American tariffs on Chinese goods, while the U.S. accuses Beijing of engaging in unfair trade practices.

Sullivan told reporters on Air Force One, while en route to Bali, that the president intends “to make clear in the meeting [with Xi] that the United States is prepared for stiff competition with China but does not seek conflict, does not seek confrontation, wants to make sure that we manage that competition responsibly.”

Sullivan said that their meeting could last multiple hours.

The leaders will also discuss Russia’s invasion of Ukraine, according to the White House.

Xi has spent years building a bond with Russian President Vladimir Putin and Beijing has largely toed Moscow’s line on the war — while declining both to provide military assistance to Putin’s forces or to join widespread sanctions on his country.

But there have been some recent cracks in China’s position. Xi did recently state, publicly, that he was opposed to threatening the use of nuclear weapons.

That apparent disapproval of Putin’s saber-rattling drew praise from Sullivan, who on Thursday called the comment “constructive.”

Lingering distrust, but a desire to talk

Despite lingering distrust and a resentment of the U.S. government since the Trump administration initiated a trade war on China, Xi’s most important bilateral relationship remains with the United States even as issues remain over China’s handling of the COVID-19 pandemic, Hong Kong, Taiwan and human rights in its Xinjiang region.

After House Speaker Nancy Pelosi visited the self-governing island of Taiwan in August, the Chinese retaliated by largely freezing all exchanges with the United States.

Taiwan, which Beijing considers part of China, has been a third rail for Xi, and in the lead-up to China’s crucial Communist Party congress in mid-October, Xi had to demonstrate his resolve to his fellow party members — especially over Taiwan.

But after he secured his third term as leader, cementing his near-absolute authority over the party and the country, a flurry of activity signaled his desire to stabilize, if not mend, his country’s relationship with the U.S.

Within days of the conclusion of the party congress, Xi sent a personal message of reconciliation to an annual dinner held by the National Committee on U.S.-China Relations, a nonprofit group headquartered in New York.

“China stands ready to work with the United States to find the right way to get along with each other in the new era on the basis of mutual respect, peaceful coexistence and win-win cooperation, which will benefit not only the two countries but also the whole world,” Xi said.

He then added that he hoped the attendees of the annual gathering would “play an active role in helping Sino-U.S. relations return to the track of healthy and stable development.”

Chinese diplomats have started to once again engage with their American counterparts, and in the weeks that followed Xi’s message, a flurry of meetings took place — absent the rancor that had permeated the relationship in the preceding months.

China’s ambassador to the U.S., Qin Gang, paid a visit to the official residence of the American ambassador to China, Nicholas Burns. Secretary of State Antony Blinken spoke with Chinese Foreign Minister Wang Yi, who was newly elevated to China’s all-powerful Politburo Standing Committee, and Chinese climate envoy Xie Zhenhua connected with his American counterpart, John Kerry, on the sidelines of the U.N. climate conference known as COP27, in Sharm-el-Sheikh, Egypt.

The Chinese previously suspended talks with the U.S. on climate issues — the countries’ sole area of agreement — to protest Pelosi’s visit to Taiwan.

The White House has warned reporters to expect no major announcements or a joint statement from the countries following the Biden-Xi meeting on Monday.

“It’s about the leaders coming to a better understanding and then tasking their teams to do intensive work,” Sullivan said Friday.

And despite its overtures, Beijing has portrayed the meeting as the United States’ idea.

“The Chinese side takes seriously the U.S. proposal for a meeting between the two presidents in Bali,” a Chinese Foreign Ministry spokesperson, Zhao Lijian, said Thursday. “The teams on both sides are in communication on this.”

Both the U.S. and China are hoping to find enough common ground to keep their relationship from deteriorating beyond repair, especially over Taiwan.